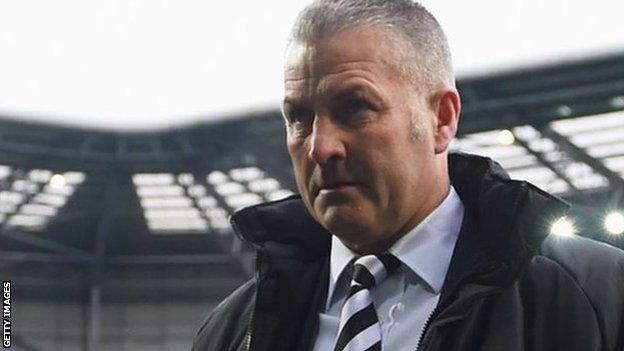 Manager Gary Mills says Wrexham are not likely to add to their squad ahead of the transfer deadline.

Wrexham are third in the National League after four wins from five games and host Halifax Town on Saturday.

Mills signed 10 permanent players and two on loan during pre-season but does not foresee any further arrivals before the window shuts at 18:00 BST on Tuesday, 1 September.

"My phone hasn't stopped and loads of players have been thrown at me.

"But there's a massive strength here at the moment and I think you can disrupt something that doesn't need disrupting.

"That doesn't mean that something won't happen or even when the loan window opens a week after that.

"I'm not naive enough to say that but at this moment everyone's doing their job superbly and we're winning football and I don't want to disrupt that for the sake of it."

The Dragons will be looking to preserve their 100% home record this season when they host second from bottom Halifax on Saturday.

Two days later they travel to Cheltenham Town to face a side relegated from League Two at the end of the 2014-15 season, but Mills is concentrating on Halifax.

"We know it's a busy weekend but we're focused on the game on Saturday," Mills said.

"We've won a few games because we've worked hard and we've been disciplined and we've got to continue to do that.

"We know what happens if you don't."

Mills said midfielder Mark Carrington will be in contention for Saturday's game against Halifax after recovering from a groin injury, but defender Ross White remains on the sidelines.