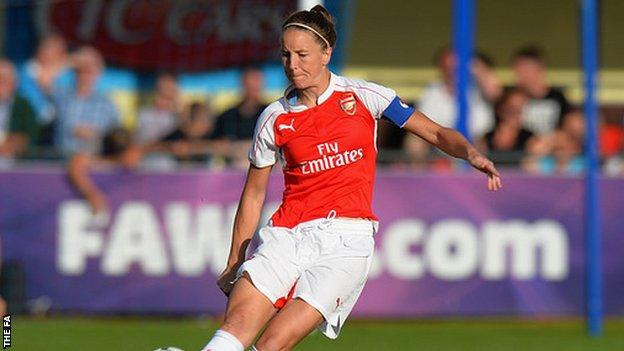 Arsenal Ladies and Manchester City Women have qualified for the quarter-finals of the Continental Cup following victories on Thursday.

Meanwhile, the in-form Toni Duggan and Georgia Stanway netted for City as they won 2-0 at Everton in Group Two.

Liverpool and Notts County ensured their progression to the last eight with victories on Wednesday.

"It was very important to get through," Arsenal captain Alex Scott told BBC Sport. "We want to win every cup at Arsenal.

"It's good, coming off the back of a league defeat, for us to get that feel-good factor again."

Reading grabbed a deserved, late consolation through Nicola Watts in a match which saw Premier League referee Michael Oliver helping out as a linesman in the second half, after an injury to an official.

Elsewhere, Doncaster Rovers Belles gave their hopes of qualification as boost, with Emily Simpkins scoring a brace as they beat Durham 5-0.

Both the Belles and Bristol currently sit third in their respective groups, with one round of matches remaining.