Jose Mourinho takes charge of his 100th home fixture as a Premier League manager on Saturday, with visitors Crystal Palace facing perhaps the most difficult away trip in world football.

In two spells as Chelsea boss, Mourinho has lost just once in the league at Stamford Bridge - a shock 2-1 loss to Sunderland in April 2014.

His record is the best of any manager in the Premier League era.

The Portuguese has achieved:

Spaniard Rafael Benitez is third on the list, with 69 wins and 231 points from his first century of matches as Liverpool manager.

The match against London rivals Palace is also Mourinho's 200th league game in charge of Chelsea.

The former Porto, Inter Milan and Real Madrid boss boasts the best record of any manager over the same number of matches.

His tally of 137 wins and 453 points eclipses the 122 wins and 417 points Scotland's Ferguson achieved with United. 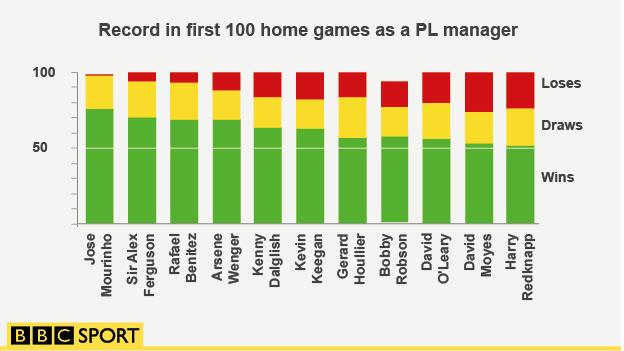