With the end of August fast approaching, some fans will have turned their attention to which players will be coming and going before Tuesday's transfer deadline.

However, there was still one more round of fixtures to cram in before the season's first month came to a conclusion.

Emotional tributes, a superb winning run extended and a fortysomething still turning out in League Two; BBC Sport has picked out some of the day's main talking points from the Football League. 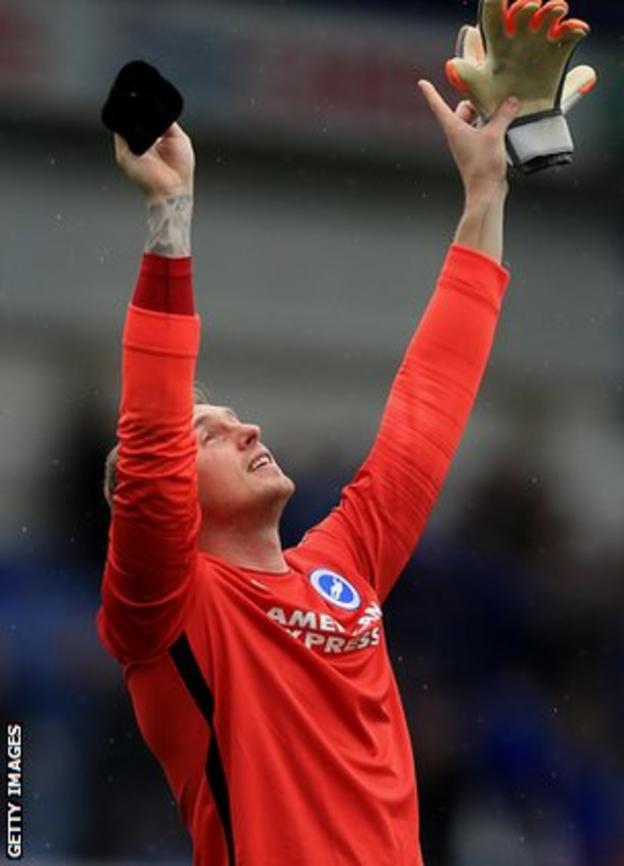 The players and staff at Brighton & Hove Albion have been more affected than most by the Shoreham air disaster, in which 11 people died.

One of the victims, Matt Grimstone, was a member of the ground staff at the Championship club's training ground and played for non-league side Worthing United.

Seven days on from the disaster, various events were held near the crash site to remember the victims.

Brighton's players wore black armbands during Saturday's game at Ipswich, while goalkeeper David Stockdale paid his own tribute by wearing personalised gloves and a special warm-up top before kick-off.

"The club has done an incredible job in helping the local police and everyone wanted to do well for Matt and Jacob," said Hughton.

At full-time, Stockdale pointed to the sky - gloves in one hand, black armband in the other.

Heard the one about the football pitch that was re-laid after the opening match of the season?

There were several complaints about the Griffin Park surface following Brentford's draw with Ipswich on the opening day. Ipswich midfielder Ryan Fraser said he had never played on one so bad.

An under-soil drainage system that had been installed during the summer had caused serious problems.

So, after one game of the campaign, the pitch was ripped up and replaced.

The work caused one of their matches to be postponed, but Brentford were back on home soil on Saturday to take on Reading.

Unfortunately for the Bees, it was anything but familiar turf as they lost 3-1 on their brand new surface.

Walsall can do no wrong at the moment. A 4-0 win at Blackpool on Saturday was their sixth victory in a row in all competitions.

That run of form has taken them to the top of League One and into the third round of the League Cup, where faltering Premier League champions Chelsea await.

"It's great when things work out like they are doing, but we know we have to be at our best every game," Walsall manager Dean Smith told BBC WM 95.6.

As for Blackpool, their misery continues. One point from five games leaves them bottom of the table.

It's not been unusual to see the name "Cole" on a scoresheet in England over the past couple of decades.

Former Manchester United striker Andrew Cole was one of the Premier League's most feared front men, and now his son - albeit two levels down the English football pyramid - is hoping to do the same.

Devante Cole swapped Manchester City for Bradford City on Friday and he marked his first appearance for the Bantams with a stoppage-time winner against Port Vale 24 hours later.

The 20-year-old, who netted his 11th career goal on Saturday, still has some way to go to match his father, who scored 187 in the Premier League alone.

But it's a good way to start.

Evergreen striker Jamie Cureton, who turned 40 on Friday, continues to be a genuine goalscoring threat at League Two level.

He received congratulatory tweets from many of his former clubs, and was presented with a special shirt before Dagenham's home game with Stevenage on Saturday.

But there was to be no late birthday present for the former Norwich and Bristol Rovers forward, who had two shots cleared off the line in a 1-1 draw.