David De Gea's £29m move from Manchester United to Real Madrid has collapsed because the necessary paperwork was not submitted in time.

No official announcement has yet been made by either club.

As part of the deal to sell 24-year-old De Gea to Real, United were planning to bring Costa Rica keeper Keylor Navas, 28, in the opposite direction.

There is no precedent for Spanish clubs being given additional time to conclude transfers as there is in England.

Blame for the failure to complete the deal is already being apportioned.

Reports in Spain claim United were responsible for the deal collapsing.

The line is they did not get their paperwork to Spanish Football Federation headquarters until a minute after the 23:00 BST deadline.

United say they have a receipt that proves they submitted the relevant documents in time.

It remains to be seen whether Real will appeal to world governing body Fifa, which is responsible for sanctioning international transfers.

The internet naturally had its say... 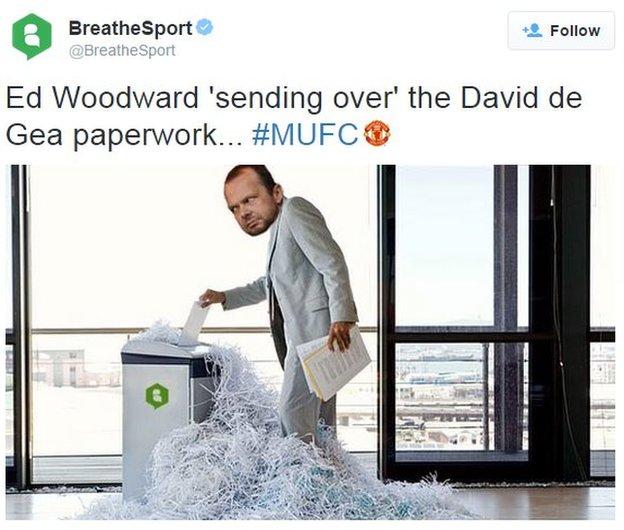 And the tweets only intensified once stories of a technical glitch at the Madrid end began to surface... 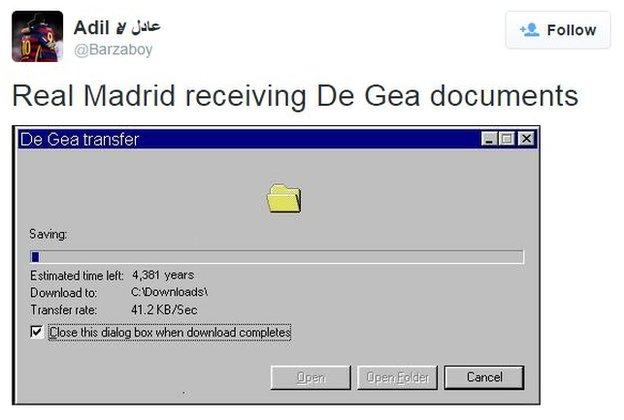 What now for De Gea?

If Real Madrid don't appeal, or do appeal and fail to push the transfer through, he'll be back at Old Trafford competing for a place in the United starting line-up.

Sergio Romero, the Argentina number one, has started all six of United's games so far this season, with Sam Johnstone on the substitutes' bench.

The Red Devils still have Victor Valdes after his move to Besiktas collapsed, but he has fallen out with manager Louis van Gaal.

De Gea, who has not played for United this season, must first turn his attention to international duty with Spain.

They have two Euro 2016 qualifying matches to negotiate, at home to Slovakia on 5 September and in Macedonia on 8 September.

They seem pretty relaxed about it all.

If De Gea stays, they have a world-class keeper to call on. If he goes, the Navas deal could still happen.

Unlike Real, United have a few more hours to do their business.

The transfer window may be shut in Spain, but it remains open until 18:00 BST on Tuesday for Premier League clubs.

What else have they been up to?

But the move that caught a lot of people by surprise involved a French teenager named Anthony Martial.

It appears United are willing to pay as much as £36m to get him.

A 19-year-old Monaco striker with plenty of potential. He has even been likened to Thierry Henry.

Nevertheless, £36m is a lot to pay for a teenager.

According to French football journalist Philippe Auclair, the size of the transfer fee has left "people speechless in France".

"He's got good technique, good skills, he's a good finisher, but he is still a raw product," added Auclair. "We don't know how far he can go."