The summer transfer window was the richest in Premier League history as total spending for the calendar year reached £1bn for the first time.

That fee could rise to £58m with a number of incentive-based add-ons.

Since the introduction of the transfer window system in 2002, gross transfer spending has exceeded £7.3bn, with over 80% of this being spent in summer transfer windows, according to financial analysts Deloitte.

Who spent the most?

Manchester City broke their club record twice this summer to bring De Bruyne and Sterling to Etihad Stadium as they became England's highest gross spenders in a single window.

Their total spend of approximately £160m beat the near £150m outlay of Manchester United in summer 2014, including deals for Fabian Delph, Patrick Roberts and Nicolas Otamendi.

The Premier League leaders were boosted this summer by having restrictions on their transfer spending lifted after meeting their Financial Fair Play target.

How the record was broken

Liverpool have used the Sterling money (and more) to sign seven players, with Christian Benteke (£32.5m), Roberto Firmino (£29m) and Nathaniel Clyne (£12m) the most expensive.

Manchester United have also been busy, spending £139m to bring in Martial, Memphis Depay, Matteo Darmian, Bastian Schweinsteiger and Morgan Schneiderlin, while Chelsea left it late in the window to conduct their serious business, signing Pedro, Baba Rahman and Djilobodji.

Newly promoted Watford have been the busiest club, signing 15 players.

What happened on deadline day itself? 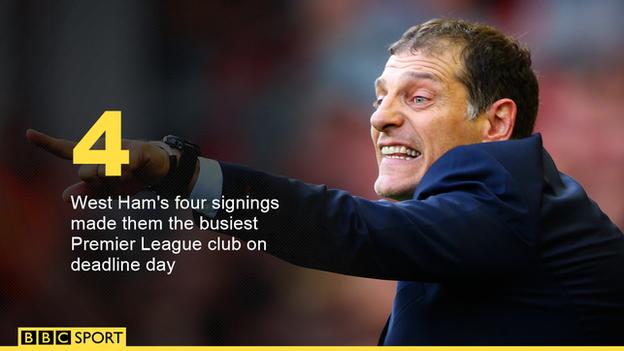 West Ham were the busiest club on transfer deadline day but what else happened on Tuesday?

Where is the money going?

Total transfer fees paid to overseas clubs were £585m, about 10% higher than in the summer of 2014 and 67% of the aggregate gross transfer spend by Premier League clubs.

The Premier League clubs' net transfer spend of £460m - the amount by which outlay to Football League and overseas clubs exceeded their income from those sources - exceeded the previous record of £410m set last summer.

Why are clubs able to keep spending?

The financial rewards of staying in the Premier League at the end of this season are immense.

The bottom club will pocket £99m per season with the champions earning more than £150m in prize money, even before extra money is paid for featuring in a TV match.

Alex Thorpe, senior manager in the Sports Business Group at analysts Deloitte, said: "Premier League clubs continue to use increases in their revenue to invest in playing talent.

"Looking across Europe, Premier League clubs' gross and net spending this summer is more than double that of any other European league. The driving force behind this is the growth and distribution mechanism of the league's broadcast rights.

"Earlier this year we reported the remarkable rebalancing of revenues and costs, such that Premier League clubs collectively generated pre-tax profitability for the first time since 1999, with clubs set to enjoy a further revenue boost when the next broadcast deals start in 2016.

"Therefore, despite a new record level of player transfer spending this year, collectively Premier League clubs have a chance to invest in playing talent while remaining profitable in a way that was previously not the case."

How much was spent around Europe?

BBC World Service's John Bennett said: "Serie A was incredibly busy this window but still produced less than half the spend of the Premier League. Desperate to get back into the premier league of European clubs, Inter brought in 15 players and AC Milan spent money on players like Colombian forward Carlos Bacca for £21m.

"Barcelona didn't let a transfer ban stop them from bringing in two new players but it was surprisingly quiet at Real Madrid where Mateo Kovacic and Danilo were the only relatively high-profile signings.

"And in France, Marseille are the example of a club struggling to compete with Premier League money. They lost around nine established players, including Andre Ayew and Dimitri Payet to Swansea City and West Ham."