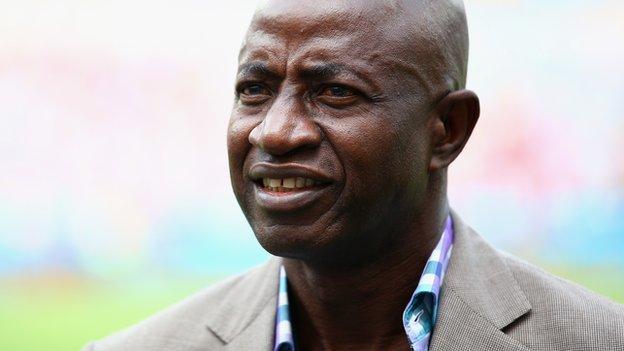 Former Nigeria international Segun Odegbami has announced his intention to become the next Fifa president.

The 63-year-old, who won the 1980 Africa Cup of Nations as a player, is the second African to go for football's top job, after Liberia's Musa Bility.

Candidates wishing to replace the outgoing Sepp Blatter have until 26 October to receive the backing of five Fifa members.

Elections will be held on 26 February 2016, with Uefa chief Michel Platini and South Korea's Chung Mong-joon among those to have already announced their bids.

Swiss Blatter announced he was stepping down in June after football's world governing body was plunged into crisis in late May, when nine Fifa officials were indicted on corruption charges by United States authorities.

They, along with five associates, have been accused of bribery and racketeering.

Swiss authorities simultaneously launched a separate investigation into how the 2018 and 2022 World Cups were awarded to Russia and Qatar respectively.

"The current scandal at Fifa is the organisation's worst crisis in its 111 years of existence," Odegbami said in a statement.

"Moving forward, Fifa thus requires a new era of leadership that can restore the dignity of the noble sport.

"The world is very interested in who becomes the next president of Fifa, considering the present images and state of this institution.

"I see myself fitting into this role."

Odegbami added that his bid will have the "highest sense of responsibility, integrity, transparency, probity and accountability".

He also said he intends to create a "new and optimistic future for football that focuses on human, infrastructural, social and community development across the world".

Like Liberia FA president Bility before him, Odegbami says it is high time that Fifa was led by an African.

"The choice of an African, specifically a Nigerian, may look far-fetched in this pursuit, noting the international coverage of Fifa and the historical trend in its leadership reputation," Odegbami said.

"However, a closer scrutiny of the international football environment reveals the real possibility of such change."

Odegbami, who played for Nigeria between 1976 and 1981, says he has already informed the Nigeria Football Federation of his intentions.

After calling time on a successful playing career, with his two goals in the 1980 Nations Cup final inspiring Nigeria's first continental conquest, Odegbami became an author, journalist and football commentator.

"Football is what my entire life has revolved around," he said.

"My life's ambition has always been to use football to make a difference in my local space and across the world."