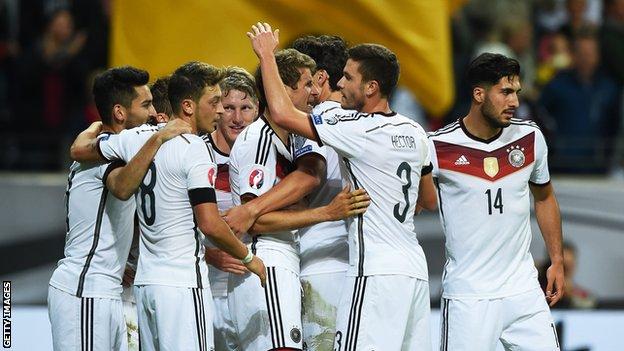 Germany moved to the top of Euro 2016 qualifying Group D with a battling victory over Poland.

Thomas Muller put the world champions ahead with a simple tap-in following a sublime move.

However Gotze's second - following in after Muller's deflected shot was saved by Lukasz Fabianski - ensured the win.

The win lifts Germany above the visitors, four points clear of the third placed Republic of Ireland, who beat Gibraltar, and four ahead of Scotland following their 1-0 defeat in Georgia.

It gives Germany revenge for last year's 2-0 defeat in Poland and puts them in a strong position with just three games remaining.

At times during this qualifying campaign, Germany have failed to live up to their world champions billing, but in Frankfurt they took charge of the game from the early stages, carving the Poles open with some sharp, precise passing - most notably for the opening goal.

Even when Karim Bellarabi was replaced by Ilkay Guendogan and Mesut Ozil was pushed out to the left, the fluidity remained.

All this came against a very good Poland team who, through Lewandowski and Krzysztof Maczynski, forced Manuel Neuer into two world-class saves.

What it means for Scotland and the Republic

There is no question that Germany and Poland are the two best teams in the group.

Scotland did brilliantly to come away with a deserved point from Warsaw and the Republic of Ireland did likewise in Germany.

But this pair are technically better and physically stronger than both Gordon Strachan's and Martin O'Neill's squads.

It will take a monumental effort for either of them to prevent the top two now being the top two at the end of qualifying, meaning the Scots and the Irish are most likely battling it out for third.

Scotland must find a performance of guts, steel and skill to take anything from Germany on Monday.

Shots on Target
Home10
Away8