Andrew Robertson says Scotland's Euro 2016 qualifier against Georgia in Tiblisi has a "must-win" feel about it.

The Hull City defender flew out with the rest of the squad from Glasgow ahead of the Group D match on Friday.

"It's a tough one to say because the gaffer's said all along we've never known what game was the must win game," said Robertson.

"But, one of them definitely will be and we'll only know that by the end of the group."

Scotland go into the match sitting third in the group behind Poland and Germany as they bid to qualify for their first major tournament since 1998.

Georgia are fifth with just three points from six games, with Gordon Strachan's men having defeated them 1-0 at Ibrox last October.

However, fans still remember how the Euro 2008 qualifying campaign was derailed by a 2-0 defeat in Georgia.

"Every game from now on is important," said Robertson.

"It does have the must win feel about it, but just because we're getting to the end of the group every game's got that feeling about it. I think it will be like that for the next four games that we've got." 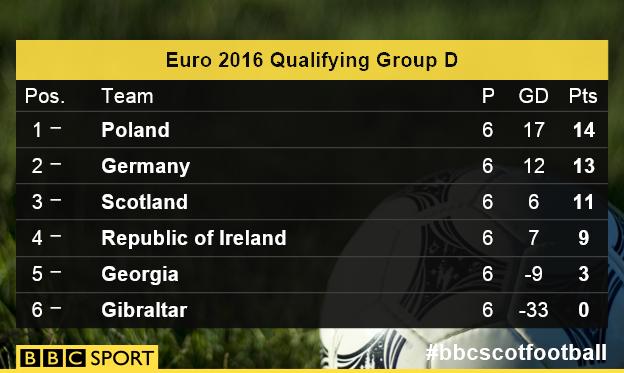 Assistant coach Stuart McCall says they have no fresh injury concerns and the management have made their minds up on eight or nine starting positions.

He believes a draw would not be a bad result for Scotland ahead of Monday's visit of world champions Germany, before the remaining double-header in October against Poland (home) and Gibraltar (away).

"If we do get a point it could be a good point if we go on to beat Poland," said McCall. "It's a game we're looking to win, all our rivals have been there and won. It's certainly the intention we go there and be positive.

"Everyone will look at the 4-0 with Poland, but it wasn't until the 89th minute Poland got their second. They could quite easily have got a draw in the last 10 minutes.

"They're improving and even though we played well against them at Ibrox we only managed to win 1-0 with an own goal.

"It'll be tight, I don't think there'll be many goals in it. As long as we get more than them I'll be happy."

McCall is also confident the long trip to Georgia will not prove a problem for a side, who have become adept at producing results away from home.

He said: "We won in Croatia, we won in Poland in a friendly then got a draw there, played well in Germany, didn't play fantastic over in Dublin but got the result we were after, and a decent performance at Wembley.

"So I don't think there's a fear we're not at home. Results and performances since Gordon's come in has shown that we do well on the road."