Real Madrid failed to score in a Champions League group-stage game for the first time since 2008 as they played out a goalless draw at Paris St-Germain.

The two sides had picked up maximum points from their first two fixtures but largely cancelled each other out.

The visitors' Cristiano Ronaldo had the best chance in the second half, shooting just wide of the far post.

The sides are level on seven points in Group A. 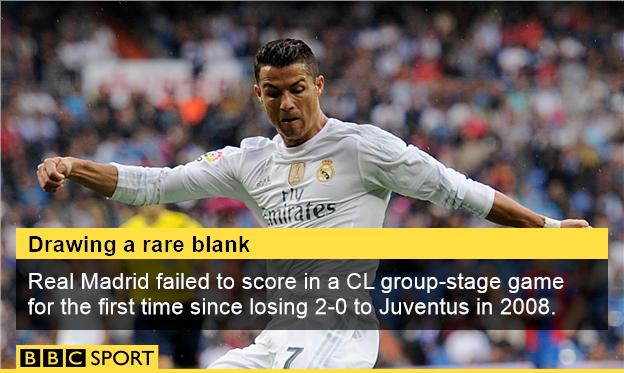 In the group's other game, Swedish side Malmo picked up their first win as they edged Ukrainians Shakhtar Donetsk 1-0.

They are third with three points, while Shakthar are bottom with none.

Atletico too good for Astana

Saul Niguez's clever backheel put the Spanish side ahead and Jackson's Martinez's shot on the turn made it 2-0 before the break.

The hosts got a third through 20-year-old substitute Oliver Torres just after the hour and a Denys Dedechko own goal completed the scoring.

Atletico are second, level on six points with leaders Benfica, who lost 2-1 at Turkish side Galatasaray.

Nicolas Gaitan put Benfica ahead inside a minute but that was as good as it got for the Portuguese club.