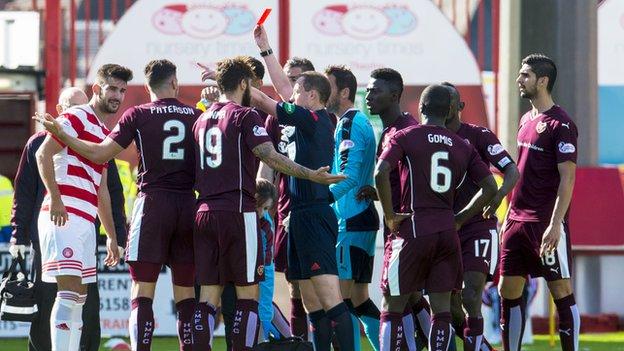 Hearts defender Callum Paterson's red card in the defeat by Hamilton Accies has been rescinded.

Referee Willie Collum sent Paterson off at New Douglas Park on Saturday for a challenge on the Accies midfielder Darian Mackinnon.

Hearts head coach Robbie Neilson said the decision was wrong, and blamed it for their first defeat of the season.

St Johnstone's Brad McKay was censured for "making a comment of an offensive nature" referring to Hearts' Juanma.

McKay had said of the Spanish forward: "He's a typical foreigner, he gets touched and goes down. He was holding the back of his head and rolling about the place."