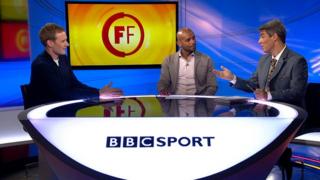 Dan Walker is joined by former England winger Trevor Sinclair and the BBC's South American football expert Tim Vickery for this week's Football Focus, which features an interview with Harry Kane on life in the England camp.

Also on the show is Israel midfielder Nir Bitton, who discusses his nation's chances of reaching the 2016 European Championships in France.