Gordon Strachan retains faith in his Scotland players despite a blow to their Euro 2016 qualification hopes with defeat by Georgia.

Valeri Qazaishvili's first-half goal was enough to give the hosts victory in Tbilisi as the Scots failed to register an effort on target.

"We didn't do enough to win it," Strachan said following the loss.

"I've just got to think that we've got three games left [in Group D]. I want to get as many points as possible."

Scotland, in third place before Republic of Ireland took on Gibraltar, tackle Germany on Monday at Hampden (19:45 BST kick off).

Strachan's side then meet Poland and Gibraltar with their chances of securing a place in the finals damaged by the reverse in Georgia. 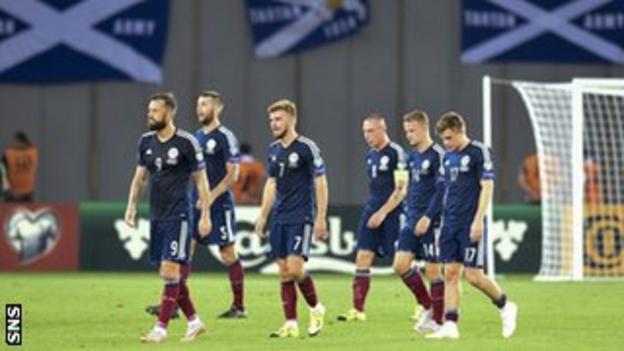 The Scotland manager praised Georgia for their defensive display and said his players did not have the physical presence to threaten the hosts.

"Of course I'm concerned after a defeat, no matter what the target is," he said. "So I'm not as happy a bunny as I was this morning but I've been there before.

"I've not changed my thought processes since it started and sometimes it's a bumpy ride to get where you want to go - we had a bump tonight and we have to deal with that and I have every confidence in the players.

"To the group, they'll get themselves organised, refreshed and looking forward to the challenge. There are players in the dressing room who I'm sure will be wanting to put on a great performance on Monday night. It'll have to be a great performance to collect points.

"We didn't do enough to win it and we were a couple of yards or passes away."