Unbeaten Brighton extended their lead at the top of the Championship to four points with a home win over Hull City, who had started the day in second spot.

The Tigers were punished for a slow start as Tomer Hemed netted his third goal in two games for the Seagulls.

Israel striker Hemed turned in from close range after an initial shot by Dale Stephens was blocked.

In the closing stages, Bobby Zamora came on for his first home outing for Brighton since April 2003.

After a sluggish opening, Hull boss Steve Bruce introduced midfielder Tom Huddlestone from the bench before half-time and also changed his side's formation in an attempt to make an impact on the game. 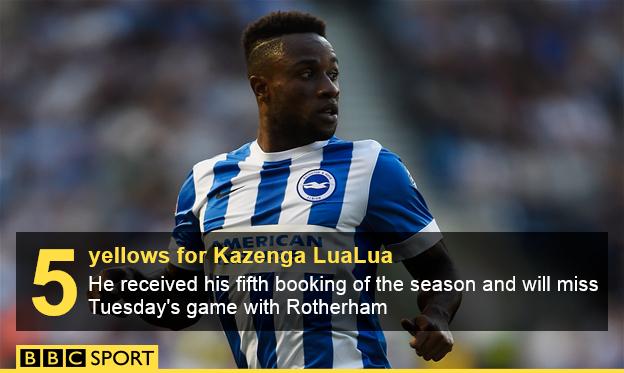 However, the visitors failed to register a shot on target until home goalkeeper David Stockdale kept out efforts from Ahmed Elmohamady, Mo Diame and Abel Hernandez in the final 20 minutes.

Despite Hull's late flurry, Brighton held on for their fifth win in six league matches and Chris Hughton's side would have doubled their lead late on but for Michael Dawson's last-ditch block to deny Beram Kayal.

They had made the perfect start when summer signing Hemed tapped in with five minutes played to continue his excellent scoring form.

Hemed could have had two more goals by half-time, but he failed to turn in Liam Rosenior's cross and saw a shot deflected into the arms of Tigers goalkeeper Allan McGregor during an excellent opening spell for the hosts.

Before kick-off, both sides paid tribute to the 11 victims of the Shoreham air disaster.

Matt Grimstone, a member of Brighton's ground staff, and Seagulls supporter Jacob Schilt were among those who died when a Hunter Hawker jet crashed on to the A27 on 22 August.

"A tribute can go two ways. It can draw you on and motivate you, and the way we started I would like to think that it inspired the players.

"We've made a tremendous start and I could not have envisaged it. I was hopeful we could challenge better. At the moment the margins are going our way."

"It took us at least 30 minutes to get going. In the second half we deserved a point as we dominated possession but we needed to create a couple of chances.

"At home we've been impressive but away from home we need to improve. We have been too up and down.

"I'm not making excuses but it's ridiculous to go to Cardiff on Tuesday when there are at least six other teams that we could play."