Spain beat Slovakia and leapfrogged their beaten opponents to move top of Group C on head-to-head record in their Euro 2016 qualifying campaign.

Jordi Alba nodded in a David Silva cross and Andres Iniesta scored a penalty after a foul on Diego Costa to put Vicente del Bosque's side in front.

Keeper David De Gea, whose move from Manchester United to Real Madrid broke down, was on the bench in Oviedo.

Spain and Slovakia have 18 points with Ukraine in third with 15.

Ukraine beat Belarus 3-1 and visit Slovakia on Tuesday, while Spain travel to Macedonia. 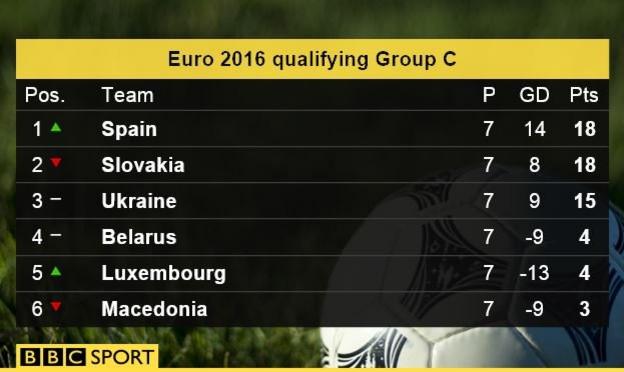 England have already qualified with 21 points following a 6-0 win over San Marino and their Group C rivals Switzerland came back from 2-0 down to win 3-2 against Slovenia.

The Swiss, who play England at Wembley on Tuesday, remain second on 15 points, while third-placed Estonia, who beat Lithuania 1-0, have 10 points and Slovenia nine.

Russia got their qualification hopes back on track by beating Sweden 1-0 courtesy of an Artem Dzyuba goal in manager Leonid Slutskiy's first game in charge since he took over from Fabio Capello.

Russia are third in Group G with Sweden a point ahead in second place and Austria are top on 19 points following a 1-0 win over Moldova.