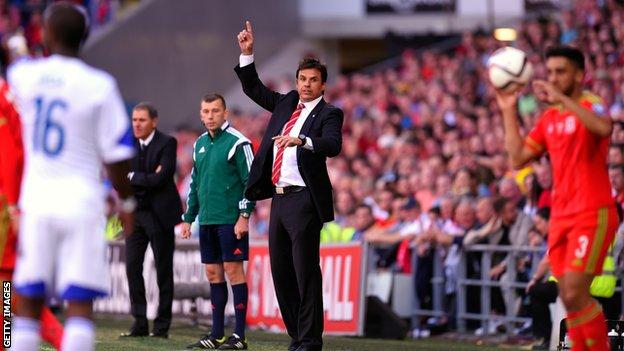 Wales manager Chris Coleman is adamant Euro 2016 qualification "is coming" despite being held to a goalless draw by Israel in Cardiff.

Victory would have sealed Wales' place at their first major tournament since 1958 with two games to spare.

However, Coleman's side need just one point from an away game in Bosnia-Herzegovina on 10 October or at home to lowly Andorra on 13 October.

"The expectation was that we would win, but now we have to wait longer."

Destiny in their own hands

Wales remain top of Group B, one point ahead of second-placed Belgium and five in front of Israel in third with the top two guaranteed qualification.

Andorra have only claimed one point away from home in competitive matches, a goalless draw against Macedonia in 2005.

And Coleman remains convinced his players can end Wales' 57-year wait for an appearance at a major tournament.

"The players were a little bit disappointed, you could sense it on their faces," he said.

"We all wanted to do it and make the Welsh public happy.

"They are a bit frustrated but if we do the same again it's over. We only need one point now."

Wales created a number of chances against Israel, with Andy King twice going close and substitute Simon Church seeing his injury-time header ruled out for offside.

The hosts were also denied a penalty in the second half, as Gareth Bale's cross appeared to hit the arm of Israeli defender Eitan Tibi.

"It was a penalty all day long," said Coleman.

"I won't complain too much, but it's a blatant handball.

"I don't know what the officials behind the goal are doing to be honest. They've got to make the call. How many times do you see that?"

What the players thought

Wales and Reading defender Chris Gunter: "We wanted to do it for ourselves and for the fans.

"But we've waited such a long time [to qualify for a major finals], we can wait another few weeks probably.

"It's mixed emotions. We all know what could have happened if we did get that goal, but we'll respect the point and we'll move on.

"We're very close now and it's been a good week - four points is a good return from two difficult games."

Wales and Arsenal midfielder Aaron Ramsey: "We showed out there what we're capable of doing [winning 3-0 in Haifa] and maybe they didn't want the same to happen again.

"They probably just thought about coming here and getting everybody behind the ball and frustrating us.

"If you don't score in the first 20 minutes in those sort of games it's quite difficult to break them down."