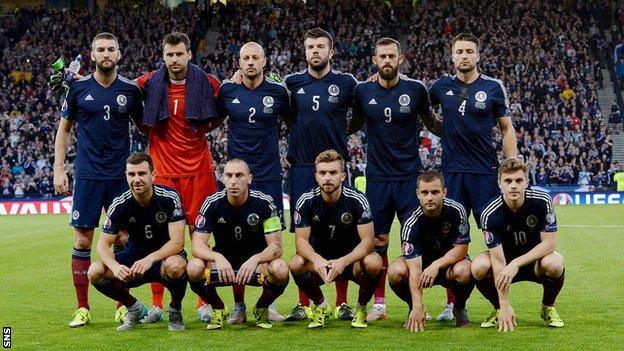 Despite equalising twice against the world champions, Scotland lost 3-2 to Germany in their Euro 2016 qualifier at Hampden.

The defeat leaves the Scots in fourth place, four points behind Republic of Ireland with two games remaining.

Played well against a very good German side and made a couple of really good saves. He can't be faulted for any of the three goals.

The full back was the most impressive of Scotland's back four. His energy going forward was a real plus for the side.

Been out of the national side for a while but showed a good understanding with Russell Martin. The defence conceded three goals but Hanley gave as much as he could against a potent attack.

Did okay and faced a difficult night, used the ball quite well and played with his head up in a position he's not used to these days.

Not one of his more impressive games and he dived in for first Germany goal. Maybe his inexperience at international level showed there. However, he took his goal really well to give Scotland renewed hope.

Better than he was in Georgia but still below his best. The fire is there and he was fully committed as always, illustrated by a number of crunching tackles in midfield.

Not really in the game against the Germans and the winger didn't do enough going forward.

Lucky to stay on the park in the second half with a couple of challenges. Gave the ball away on a number of occasions and will be disappointed with his display.

Excellent attitude and held the ball up well despite lack of support - no real chances and you have to feed striker with ammunition.

Put himself about when he came on. Didn't really have time to make an impact.

Only 10 minutes to make a difference and by that stage Scotland had decided to play the ball forward early - this didn't suit him and he struggled as a result.

Showed good appetite when he replaced Maloney, his directness and willingness to take defenders on gave us a lift. He made a far greater impact than in Tbilisi.