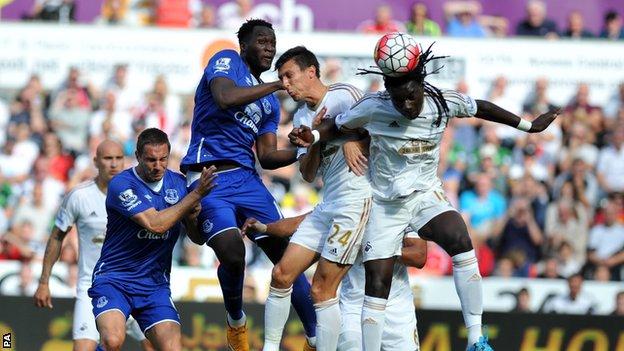 Swansea and Everton emerged with a point apiece from a goalless draw at the Liberty Stadium.

Everton had the better of a dull first half, although Swansea's Bafitimbi Gomis came closest to scoring when skewing wide of Tim Howard's goal.

Both teams improved after the break but Everton striker Romelu Lukaku twice shot over the bar when through on goal.

Kevin Mirallas was sent off in the last minute, 136 seconds after coming on as a substitute, for a studs-up challenge.

The dismissal came too late to help Swansea, who had defended well to repel numerous Everton attacks in the final quarter of the game.

Neil Taylor made an excellent last-ditch challenge to block a Lukaku shot while Ashley Williams deflected a Brendan Galloway shot over with his head.

John Stones, excellent in the Everton defence throughout, swept up Swansea's counter-attacking play, while Howard was called upon to parry a fierce Gomis shot.

Reaction to this match and the rest of Saturday's action

With the game winding down and both teams seemingly having given up on the idea of finding a late winner, Belgian Mirallas made a rash and dangerous challenge on fellow substitute Modou Barrow, going in over the top of the ball.

The winger's absence will be sorely felt by Everton over their next three matches, as Roberto Martinez's side struggled to convert the chances they created.

Lukaku was the most wasteful of the Toffees' players. Aside from his two wild strikes into the stands, the Belgian international twice more took too long to finish, allowing Swansea players to cover.

Steven Naismith and Arouna Kone were also disappointing in the Everton attack but Ross Barkley was bright in midfield, making several incisive runs and passes.

The home side were wasteful in attack too, but they did at least manage to have more shots on target - three to Everton's two.

Gomis looked the most likely of Garry Monk's players to score, but their biggest problem was finding a way around the Everton defence.

Stones was again composed throughout and the England centre-back repeatedly made key interventions to steer his side away from danger.

Everton right-back Ty Browning kept Jefferson Montero quiet on what was the 21-year-old's first Premier League start, and that will be another positive for Martinez.

The Stats you need to know

Swansea manager Garry Monk: "We had chances and they had chances, but I think both teams will be happy with a point.

"I thought it was an entertaining game and a good advert for Premier League football. Both teams went for it and both teams defended well.

"I felt it was a good performance. If you can't win a game, you have to make sure you don't lose it, which is what we should have done last week."

Everton manager Roberto Martinez: "The first half was very level. We needed to be more aggressive going forward and that's why I'm pleased with the second half.

"We created good chances and they should have won us the game. I'm disappointed, but the overall performance was satisfying.

"In the second half we took control, we played through them a few times and everything started with the composure of John Stones and Phil Jagielka."

Everton play at Reading in the League Cup third round on Tuesday evening before travelling to West Brom for a Monday night game in the Premier League.

Swansea play at Hull in the League Cup third round on Tuesday before travelling to Southampton in the Premier League on Saturday.