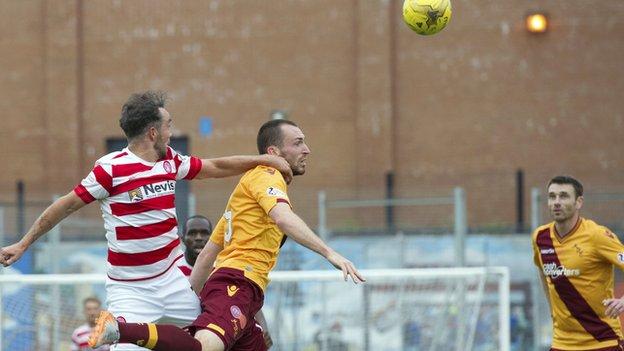 Dougie Imrie's looping header proved the difference between the teams.

Motherwell's lack of goalscoring threat once again proved to be their downfall as they fall to 10th.

Only bottom side Partick Thistle have scored fewer than Ian Baraclough's side, with the two set to meet at Fir Park next weekend.

In truth, this was a game of few chances at either end, but crucially Imrie took one of those created by Accies.

Antons Kurakins swung in a deep cross from the left and the winger climbed above Joe Chalmers to head past Motherwell goalkeeper Connor Ripley.

The visitors had survived two big scares in the first period, which was otherwise low on thrills.

Lucas Tagliapietra thought he had given Accies an early lead as he headed Ali Crawford's free kick into the net, but referee Craig Thomson awarded a foul for an infringement on Ripley.

And then, late in the half, Crawford hammered a left-foot shot off Ripley's bar from just outside the box.

Following Imrie's strike, Ripley did well to push away Greg Docherty's fierce shot, to keep Motherwell in the game.

But save for a late penalty shout for handball by Tagliapietra, they scarcely looked like salvaging anything from the match and on current form could be heading for another battle at the bottom end of the table.