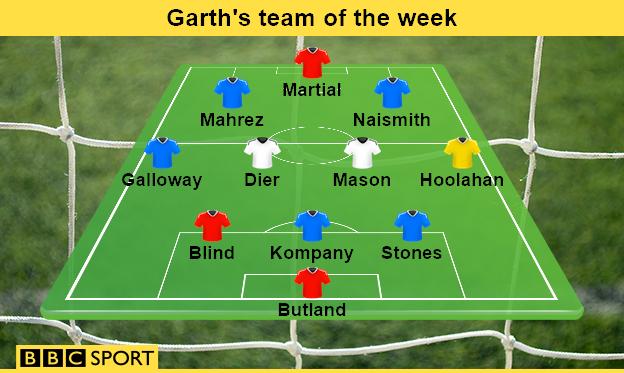 Another gripping Premier League weekend saw champions Chelsea fall further off the pace as they were undone by a superb Everton display at Goodison Park.

Manchester United - helped by a new face - put Liverpool to the sword at Old Trafford while another promising youngster came off the bench to give leaders Manchester City their latest win.

Leicester produced a stunning comeback to leave Aston Villa boss Tim Sherwood 'gutted',Tottenham left it late to win at Sunderland and Arsenal got back to winning ways at home by dispatching Stoke.

Good performances everywhere - but who was the best and do you agree with my selections?

Stoke City's poorest start to a Premier League campaign would have been considerably worse had it not been for Jack Butland. Arsenal seemed to carve Stoke open at will at times during their 2-0 win, leaving Butland terribly exposed. The England goalkeeper made telling saves from Theo Walcott and Mesut Ozil and a world-class save from Alexis Sanchez when he somehow pushed a header onto the post.

Stoke manager Mark Hughes insists that he has "good talented individuals" in his side and that should be enough to see them through the season. The difficulty I have with that statement is that they may be talented individuals but it's Butland who is sparing their blushes at the moment.

Chelsea have made their worst start to a top-flight season in 29 years. Part of the reason for the malaise at Stamford Bridge is that Jose Mourinho can't seem to buy players on demand anymore. John Stones is one such player.

Stones and Everton not only resisted the overtures of 'we are the champions, come and join us' pouring out of the Bridge over the summer, but the defender then gave Chelsea a demonstration of his composure and at times sheer class for Everton in their win over Mourinho's side.

At times it took your breath away. Something very interesting is happening in the game when Everton can outmanoeuvre Chelsea off the park and then proceed to outthink them on it.

I was at Selhurst Park to see leaders Manchester City face Crystal Palace, and a draw would not have been out of the question. It was worth the trip to south London just to see Vincent Kompany marshal his troops to their fifth straight win of the season and witness their reaction at the end of the game. City were not brilliant but Kompany never put a foot wrong.

City's response to the victory, and the celebrations that followed with their fans, was telling. To be four points clear at the top of the table at this stage of the season is one thing, but to be 11 points above Chelsea has almost certainly put the champions out of the title race, and that was clearly the point of their celebrations.

When a centre-back dispatches a set piece the way Daley Blind did to open Manchester United's account against Liverpool you suspect that the player is exceptionally comfortable on the ball. You would be wrong, of course, to assume that all defenders can finish the way Blind did but then again he is not a natural centre-back. His performance against the Reds was extraordinary.

The block on the line from Martin Skrtel's header was superb but the speed of Blind's recovery to deny Roberto Firmino from converting the rebound was remarkable. The way Blind put his body on the line was the best defending I've seen this season.

I haven't a clue why Wes Hoolahan spent part of the game with his shin pad in his hand but it was during that period that the Republic of Ireland international found the inspiration to waltz through the Bournemouth defence and present Cameron Jerome with his first Premier League goal of the season.

From then on Hoolahan simply ran the show and was aptly rewarded for his efforts when he put the game well and truly beyond the visitors with a superb solo effort. Like picking Cherries.

Playing in front of the back four as a midfield holding player for Tottenham, Eric Dier was as enthusiastic as it gets. I have, after all, seen him play at full-back and centre-back and cope admirably but I never thought he had the ability to play consistently in a more forward position where one's influence on the game is often more pronounced.

His impact for Spurs against Sunderland was impressive and his change is proving to be an inspired move by manager Mauricio Pochettino.

I have already mentioned Eric Dier but the relationship between him and Ryan Mason could become a very important dynamic for Spurs this season. Mason is becoming more relevant for Tottenham as the season wears on but what impressed me most about his performance against Sunderland was his desire.

His touch that took him goalbound was a little heavy but Mason still risked injury in order to clip the ball over the advancing Costel Pantilimon. Nice to see a midfield player going in where it hurts to score goals.

It's not the first time that Brendan Galloway has deputised for Leighton Baines on Everton's left but I can't remember him playing such a prominent role as he did against Chelsea. His cross for Steven Naismith's first goal was superb. One Goodison banner said "No Means No, Jose. All Cash, No Class" in reference to Chelsea's botched attempt to lure John Stones to the Bridge.

Mourinho might have been more astute trying to buy Galloway instead. At least Mourinho would have one left-back in his team who is naturally left-footed.

Leicester City were 2-0 down to Aston Villa at one stage and looking at the trapdoor. But that was before Riyad Mahrez took control of the game in the second half and took Aston Villa apart. It's been a long time since I've seen a player glide past defenders with such ease.

He produced the cross from a corner for Ritchie de Laet to start Leicester's comeback. He was instrumental in the move that produced Jamie Vardy's finish and fashioned the most exquisite chip for the courageous Nathan Dyer to score the winner. A wonderful second-half performance by the Algerian.

If you are going to complete your very first Premier League hat-trick you might as well as do it against the champions. The Scotland international came on as a substitute and tore the heart out of Chelsea. His first goal was a header, his second was with his left foot and his third was with his right. Now that's what I call the perfect hat-trick.

What a start to an already promising career at Old Trafford. Anthony Martial may have cost £36m but who cares if he can score goals with the same dexterity as he did when he came on against Liverpool?

If Martial is bright he will do exactly what Wayne Rooney tells him and forge a relationship with his captain as soon as possible - a point that seems to have been lost on fellow new signing Memphis Depay.

Do what Rooney says, listen to what he says, and don't try to be an overnight sensation, there's plenty of time for that. You've had a great start now let Rooney and those boys around you make you a star.