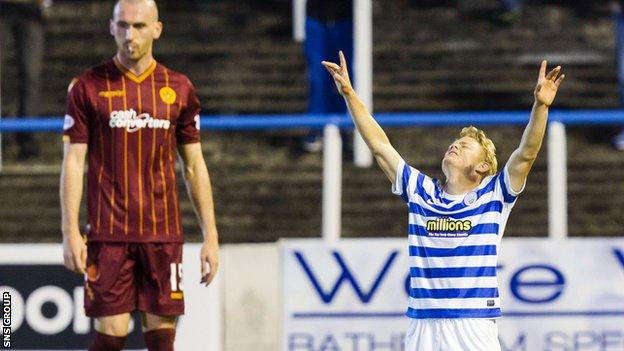 The on-loan Swansea striker swept a shot high into the net on 11 minutes as the Championship side dominated.

The hosts were punished for wasting chances when Scott McDonald tapped home from close range in stoppage-time.

But Samuel finished a Denny Johnstone cross and Michael Tidser poked in from a Bobby Barr cut-back before Louis Moult netted late on for 'Well.

There was a long delay in extra time as Motherwell fans clashed with police and stewards.

And the mood of those supporters will have darkened further after this latest defeat, with the Steelmen struggling for form in the Premiership.

Under pressure manager Ian Baraclough dropped skipper Keith Lasley and top goalscorer Moult but there was to be no change in fortune for the team sitting 10th in the top flight.

The opening goal was something of a gift as former Scotland defender Stephen McManus failed to deal with a simple ball and it ricocheted off his heel and into the path of Samuel, who fired into the roof of the net from 14 yards.

However, the Greenock hosts created the better chances, with Thomas O'Ware heading over and Peter MacDonald forcing a good stop from Connor Ripley before stabbing Romario Sabajo's cross wide.

After the interval, MacDonald hammered a 25-yard free-kick against a post, a Ross Forbes set-piece deflected just wide and Connor Ripley saved well from Tidser, with the visitors on the ropes.

But substitutes Lionel Ainsworth and McDonald temporarily rescued Motherwell with almost the last kick of regulation time when the Australian swept home a cross after the winger had got to the byeline.

The setback only seemed to energise Morton in extra time and they were soon back in front when Samuel converted Johnstone's low cross and Tidser scored in the second period with the outside of his boot after good work from Barr.

Moult gave Motherwell a lifeline with four minutes left after Jack Leitch's shot was blocked on the line but there were no further scares for the hosts.

Greenock Morton manager Jim Duffy: "It was a drama filled cup tie. To lose the goal late on was a real kick in the teeth but credit to their players they didn't feel sorry for themselves, raised the tempo again, and were deserved winners.

"We can go back many years where teams used to dread coming to Cappielow. That's maybe not been the case for a while, so hopefully we can get back to that."

Motherwell manager Ian Baraclough: "Going into extra-time I thought we answered a few questions but the first half for me it's not what this club stands for, they've been told it won't be tolerated. People have got to realise there's livelihoods at stake, no more so than their own.

"I've had harsh words with one or two of them. It's as if not every game has meant enough to them.

"Every day in training you've got to give everything you've got so it becomes natural in games. Training has been good in the main, I've just asked one or two there does it really mean something to lose a game of football, only they can answer it in their own actions."