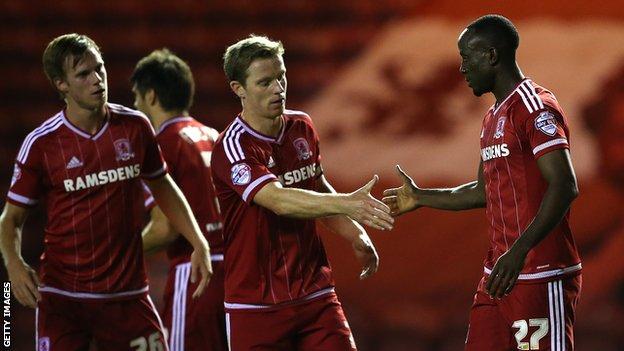 Middlesbrough moved into the League Cup fourth round for the first time in three seasons with an assured victory over Championship rivals Wolves.

The hosts doubled their advantage when Diego Fabbrini finished off a fine team move.

Adomah put the game beyond doubt after more fine build-up play from the influential De Pena.

Aitor Karanka's side were knocked out of the competition by Liverpool at this stage last season, but a repeat never looked likely against more modest opposition.

Adomah requested a transfer last month after a reported disagreement with Karanka, but that now appears to be behind him.

The Ghana international has scored three goals since he was restored to the starting line-up.

"We changed a lot of players from Saturday's game and they wanted to impress. I told the players at half-time that I wanted to have a headache ahead of Sunday picking the starting XI.

"They were making it easy for me in the first half, but the second half was different. We were much better in the second half and now I have that headache in terms of picking the team to play Leeds."

"Their options are very good and the goals certainly turned it in their favour.

"Middlesbrough have like-for-like options with their replacements, and it showed.

"They have built on a good foundation from last season and are a very powerful side."