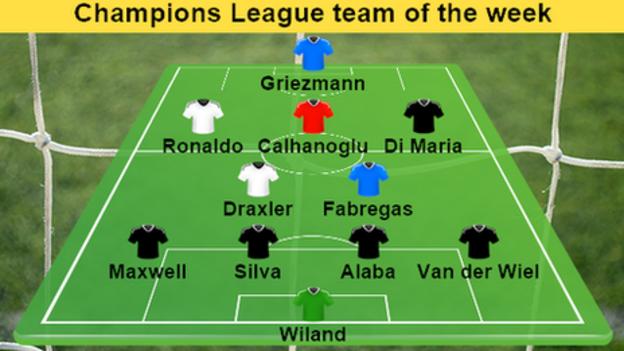 After the first round of games in the European football's biggest competition, Paris St-Germain take pride of place with four players in our Champions League team of the week.

Former Manchester United and Real Madrid winger Angel Di Maria is among them after scoring his first goal for the French champions in their 2-0 win over Malmo in Group A on Tuesday night.

Only one of the four Premier League sides managed to get a player selected after a disappointing opening round which saw Chelsea emerge as the sole winners thanks to their 4-0 victory over Maccabi Tel Aviv.

Blues' midfielder Cesc Fabregas gets the nod after scoring one and creating another goal for Diego Costa in the Group G win on Wednesday evening.

Malmo's goalkeeper had a busy night in the French capital, with the hosts having 22 shots compared to Malmo's six. The 2-0 scoreline to PSG might have been a lot worse without 34-year-old Sweden stopper Wiland.

Netherlands international Gregory Van der Wiel, 27, has been at PSG since 2012 and is a force both defensively and going forward. He was one of his side's star men in the easy victory over Malmo.

Are there many better defenders in Europe than the Brazilian? He made four clearances to keep Malmo at bay and snuff out any potential comeback. The skipper led from the front.

Bayern Munich enjoyed more than 70% possession in their 3-0 victory against Olympiakos, with 23-year-old Austrian David Alaba helping his team keep control of the ball.

Maxwell, who has been at PSG since 2012, will have tougher tests to come than against Malmo, but the 34-year-old Brazilian limited the threat down the flanks from the Swedes, who knocked out Celtic in qualifying last month.

Wolfsburg just edged CSKA Moscow with a 1-0 victory and much of his team's dominance of possession was down to the German international.

Chelsea strolled to a 4-0 victory over Maccabi Tel Aviv, with Cesc Fabregas dominating the midfield battle. The Spain international played 125 passes - 55 more than anyone else.

The winger joined PSG from Manchester United this summer and is beginning to hit form for his new employers. He put in a 17 crosses on Tuesday, more than any other player.

Bayer Leverkusen kicked off with a 4-1 victory over BATE Borisov, with 21-year-old Turkey international Calhanoglu having an influential match. He scored twice, including one penalty.

First name on the team-sheet? Cristiano Ronaldo, who scored five goals in one La Liga game last weekend, is certainly that at Real Madrid, who put four past Shakhtar Donetsk without reply on Tuesday night. A hat-trick means he reclaims the Champions League record scorer mantle from Lionel Messi. He now has 80.

Atletico Madrid opened their campaign with a 2-0 victory over Galatasaray in Turkey. The hosts were out of it inside 25 minutes thanks to Antoine Griezmann's goals.