Valentine's Day can, for some, be fraught, but Ross County can look back on 14 February of this year with affection.

They had a date with fellow relegation candidates Motherwell, and with only one home win and just 12 Scottish Premiership points all season, the gift of three points was essential.

Defeat would have left them nine points adrift of Motherwell and, as results turned out, six behind St Mirren. How the Buddies must wish things had gone differently.

Few would have imagined that Ross County would recover from a defeat. A play-off would have seemed the best possible outcome to avoid relegation.

As it turned out, a fiercely contested match ended in euphoria, a 3-2 win that brought hope, tempered by the realisation that they still needed an almost miraculous turnaround to prevent a slide into the Championship.

Up until then, season 2014-15 had been fairly wretched for all connected to the Dingwall club.

Derek Adams, after a largely successful period in charge, was relieved of his duties following four consecutive league defeats at the start of the campaign.

Chairman Roy MacGregor described the decision to end his reign as "the most difficult decision I've ever had to make in football".

It was clear that he wanted the club to take a different direction on and off the park and he acted decisively.

Jim McIntyre was recruited from a successful spell at Queen of the South and has just begun his second year in charge.

As he sits within the stadium, McIntyre has a look of satisfaction at what has happened since that pivotal date in mid-February.

"When we came in the door the remit was to stay up," he told BBC Scotland. "The run we put together was fantastic."

In a game full of opinion and counter-claim, no-one can dispute the impressiveness of their achievements.

A sequence of eight wins and a draw in nine games meant they could not be automatically relegated, but with other teams responding to the threat of a relegation play-off the Staggies' top-flight safety was only secured with a game to spare.

"That allows you to build," McIntyre continued. "We've certainly done that in terms of the infrastructure of the club and improving the squad."

There have been difficult decisions along the way. Club captain Richie Brittain was released with a host of players. The management team moved swiftly to recruit and re-sign the talent they believed would improve their standing in the top division.

At this stage it seems to be working. Fans in the Highlands are starting to whisper about a potential top-six finish. Who would have thought that six months or so ago? 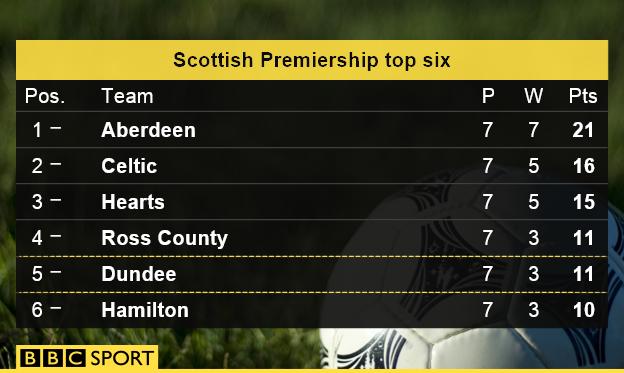 "We managed to start the season the way we ended it," said McIntyre. "We've shown decent consistency. We know there's a long way to go."

They sit fourth in the table at this early stage of the season. While not quite on the winning run of last season, they seem capable of at least challenging the top six.

From that crucial win over Motherwell, County have gathered 43 points from a possible 63, about two points a game on average.

Does that raise expectation and targets?

"We have targets that we set at the start of the season which will remain private," the manager reluctantly offered.

"We need to work ever so hard to try and achieve them.

"Come the end of the season, if we've met them we'll know if it's been a successful year or not."

Who knows how far they'll go on a journey that's promising a very different experience this season compared to the tension of last.