Gary Madine scored an injury-time header to rescue a point for Bolton against Championship leaders Brighton, who finished the game with 10 men.

Bobby Zamora teed up Dale Stephens for Brighton's opener after Ben Amos failed to deal with a cross, before Jamie Murphy added a second from close range.

Neil Danns pounced on a loose ball on the edge of the area to pull one back.

Murphy was sent off for a heavy tackle on Danns before Madine levelled after having an effort ruled out.

The draw leaves Chris Hughton's Brighton unbeaten after nine Championship games, while Bolton avoided their fourth league defeat of the season to stay 21st in the table.

Bolton's Max Clayton, in his first appearance for nine months after recovering from knee surgery, had a chipped effort tipped over by David Stockdale inside five minutes.

Sam Baldock went close for Brighton while a deflected Liam Feeney shot tested Stockdale at the other end before the visitors stuck twice in four minutes. 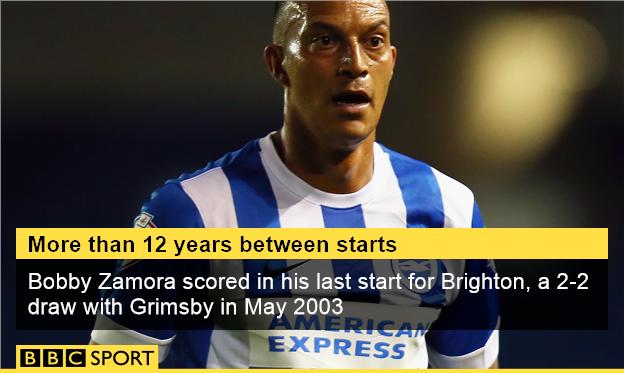 Former England international Zamora, making his first start for Brighton in more than 12 years, set Stephens up for the first, collecting Amos' fumble before working it back to the midfielder on the edge of the area.

Liam Rosenior burst into the box and found Murphy, who steered home the second but Gordon Greer failed to add a third with a headed chance.

Danns pulled a goal back after the ball broke kindly for the midfielder following Stephens' tackle on Madine.

After the break, Rosenior had a double chance but was denied by Amos before sending the rebound over.

Stockdale kept Madine out after Murphy's dismissal, and after the striker fouled the goalkeeper in an attempt to level late on, he eventually earned Neil Lennon's side a share of the spoils after meeting a Liam Feeney cross.

"I think we got what we deserved and Madine got what he deserved. He has been knocking at the door for weeks to get a goal and that is what he is capable of.

"He got up brilliantly and planted a fantastic header. You could see what it meant to myself and the people in the stadium.

"We showed a bit of character, which is what we didn't show (against Huddersfield) last week. . We are a smidgeon away from being a good side at this level."

"I thought we should have had 11 men on the pitch which allows us to apply pressure higher up the park.

"I thought we were the better side, though we made it tougher for ourselves by conceding the goal we did just before half-time.

"But I genuinely felt we were going to hold out. I couldn't see Bolton scoring, which makes it harder to take."