In her latest column for BBC Wales Sport, Seattle Reign midfielder Jess Fishlock looks forward to Wales' opening 2017 Women's European Championship qualifier against Austria and reflects on a successful season for her club in the National Women's Soccer League.

I'm really excited by Wales' Euro 2017 campaign and we've got a big chance to qualify for a major finals for the first time.

After missing out on the World Cup, there's been a year of waiting around until this campaign and Wales manager Jayne Ludlow has taken over in what has been a transition period.

We made huge strides under our former manager Jarmo Matikainen and it's up to us now to build on that and take the next step, which is to qualify.

We start with probably one of the most important games of the whole campaign, away to Austria.

If we get a win it would put us in such a good position in the group.

We are the third seeds behind Norway and Austria and it's going to be a battle between the three countries to reach the finals in the Netherlands.

This time around, the top two go through to an expanded European Championships and therefore it's not the end of the world if you slip up here and there.

But we have to take points off those two top seeds and also do our job against Israel and Kazakhstan.

If we can get results and points in the opening two away games against Austria and Norway then we will be in a really good position.

We've got everyone back fit now, which will be a huge boost for us.

'Changing the face of Welsh football'

It's brilliant what the men's side are doing, having almost qualified for the Euro 2016 tournament in France, and they are changing the face of football in Wales.

You see the passion every time they play. They don't go through the motions and you see that they want to do so well for Wales.

When you have a team that shows that much passion you know that's what our country is all about and that's what makes it special for me.

Hopefully we can use it to help us to do the same thing. 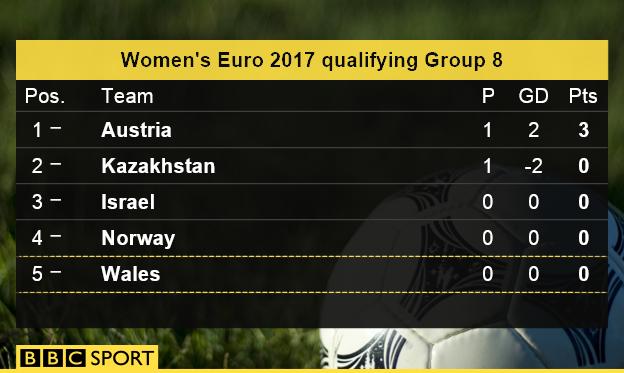 United States' victory over Japan in the Women's World Cup final - not just the win but how they did it - has got everybody in America on board, including kids and middle aged people.

Two of the national team play for Seattle Reign - Hope Solo and Megan Rapinoe - and our average attendance is now 5,500. We've had sell-outs, which is just phenomenal.

With the Olympics next year I think things will get bigger and better and things are looking great right now.

It's been a great season for Seattle Reign in the National Women's Soccer League after a lot of people had written us off, saying we would be unable to reproduce what we did last season.

But we've shown, with our strength in depth, that not only can we maintain it but we also want to be able to go one better and win the Championship as well as the Shield.

We face FC Kansas City in the NWSL Championship Game on 1 October, the team that beat us in last year's final.

It's not about revenge but there will also be that little bit inside us that will remember last year and how much it hurt us.

It's only natural to not want to have that feeling again and to get the win.

Kansas are a great team and it's fitting that the two most consistent teams in the NWSL have got into the final again.

I think it will be a very, very good game of football.