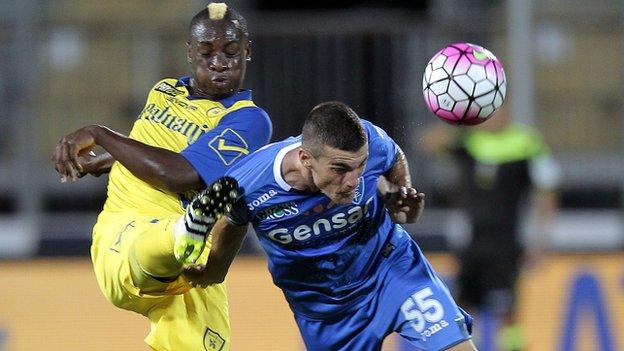 DR Congo international Paul-Jose M'Poku fractured his cheekbone on Sunday as his Chievo side lost 1-0 at home to Inter Milan.

The incident cost Chievo in more ways than one as coach Rolando Moran was sent off for reacting angrily to the challenge by Felipe Melo.

The Brazilian appeared to elbow his midfield counterpart mid-air late on.

The 32-year-old is no stranger to controversy, having earned the nickname 'The Pitbull' while at Galatasaray, the Turkish club he left in August to join the 18-time Italian champions.

Winger M'Poku, who entered the field after 74 minutes as a substitute, finished the game despite the 83rd-minute incident - for which Melo went unpunished.

The 23-year-old is on loan at Chievo from Belgian side Standard Liege.

He made his international debut for DR Congo earlier this year, having previously represented Belgium at junior level.

After four games, Inter Milan lead Serie A with 12 points - with Chievo five points behind.

The Senegalese striker, who scored the winner against Genoa last weekend, struck the only goal of the game in the 35th minute.