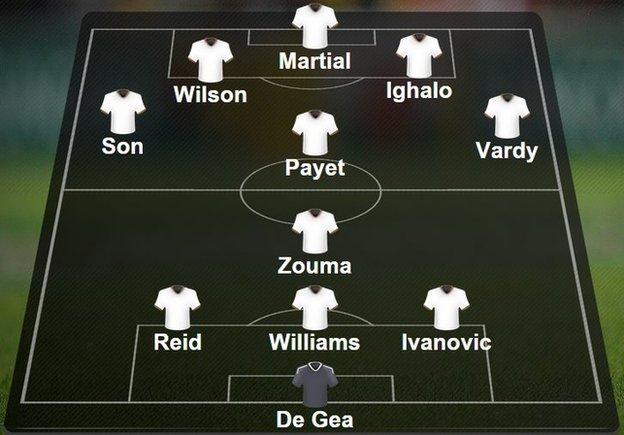 Plenty of goals, plenty of red cards and plenty of controversy. Another normal weekend in the Premier League then.

Leaders Manchester City lost their 100% winning record in a shock home defeat by third-placed West Ham, a result which allowed Manchester United to move within two points of their neighbours following a nervy win at Southampton.

Defending champions Chelsea avoided a third straight defeat as nine-man Arsenal lost their discipline and the match, while comeback kings Leicester battled back to salvage a 2-2 draw at Stoke and stay in the top four.

At the other end of the top-flight, it was a bad weekend for the north-east teams. Both Newcastle and Sunderland were beaten to stay rooted at the foot of the table, with Southampton, Aston Villa and Stoke also in the bottom five.

But who were the standout performers? Here's my selection - do you agree?

Nine victories in 11 visits to Southampton for Manchester United is some record. Yet it might have been a slightly different statistic had it not been for a wonderful performance by Red Devils keeper David De Gea. He produced a string of magnificent saves during the match but how he managed to pull Saints defender Jose Fonte's header out of the net when it appeared to be past him - while United were leading 2-1 - I will never know. One of the best saves I've seen in years.

There has been no greater admirer of Branislav Ivanovic than me during his time at Stamford Bridge. However, his form had dipped so badly this season I felt compelled to question his selection in the Chelsea line-up at all. That said, against Arsenal, the stand-in Chelsea captain looked like he was back to something that faintly resembled his best. Of course, we will never know how good his performance really was because of referee Mike Dean's insistence that Arsenal play the best part of the game with only 10 men.

As far as 0-0 draws are concerned, the stalemate between Swansea and Everton was a good game of football. Swansea were not outstanding by any means but they had to be resolute. Ashley Williams produced a captain's performance and persisted to throw himself at anything that threatened Swansea's goal. It wasn't that long ago the Wales defender was attracting the attention of some of the bigger clubs in the Premier League. A few more performances like that and he could become the focus of their attention again.

Winston Reid could not have started this season better, nor could West Ham for that matter after taking nine points from their three games on the road. The Hammers centre-back seemed to stop everything in his path against Manchester City, making two superb blocks from Yaya Toure that looked certain goals. But it was Reid's header from a corner that resulted in West Ham's winner. Wins away at Arsenal, Liverpool and now Manchester City make the Hammers the 'Kings of the Road' at the moment.

I went to see Chelsea play Maccabi Tel Aviv in the Champions League last week and was not in the least bit surprised to see Kurt Zouma in the starting line-up against a less than average team. I did raise my eyebrows though when I realised that Blues boss Jose Mourinho had left out skipper John Terry in favour of this rising star against Arsenal. Zouma's selection could not have been better illustrated than when the 20-year-old Frenchman slipped on the halfway line as the turbo-charged Theo Walcott was bearing down on the Chelsea penalty area. Zouma not only recovered from the fall with amazing agility but produced a world-class tackle to stop the England international in his tracks. Right then and there Mourinho justified his selection.

When Jamie Vardy won his England call-up at the end of last season I thought Roy Hodgson had lost his mind. Having watched the Leicester player repeat what he did at the back-end of last season, and run Premier League defences ragged, it's becoming patently obvious that Vardy is no flash in the pan. Not only is he becoming the king of chasing lost causes, a feature that almost frightened the life out of Stoke City, but his goalscoring exploits are quickly developing serious international credentials. Another top-class performance from the Fox in the box.

West Ham manager Slaven Bilic went to great lengths to sign Dimitri Payet from Marseille. Since his arrival at Upton Park this season the Frenchman has been a revelation. Bilic insists his latest signing is in the same class as Manchester City's superstar David Silva. Unfortunately it was difficult to compare as the two, as Silva didn't play, but Payet was easily on a par with the likes of Yaya Toure and £55m new signing Kevin de Bruyne. I think that will do.

I love this boy's energy. Son Heung-min scored two goals in midweek in the Europa League and against Crystal Palace showed an alarming willingness to always make himself available to receive the ball anywhere on the pitch. Based on what I've seen so far I think this lad is going to be a big hit with Spurs fans.

The Nigerian could have scored a hat-trick but settled for two goals and three points at Newcastle. There is a flourishing partnership developing between Ighalo and Troy Deeney that needs to be carefully nurtured by Watford manager Quique Sanchez Flores. The Hornets have only lost one game in six since their return to the Premier League and if they can keep Ighalo in this form Watford's survival looks odds-on.

The teenage Frenchman made a spectacular start to his Manchester United career against arch-rivals Liverpool but looked the real deal against Southampton. He scored two goals that he made look routine. Not since Ruud van Nistlerooy have I seen a United striker approach goalscoring with such a cold and ruthless demeanour. If Martial keeps this up his £36m price tag will seem nothing more than a mere snip.

Wilson turned Younes Kaboul so completely on the edge of the box to score Bournemouth's opening goal the Sunderland defender never recovered. The Cherries striker's fifth goal of the season epitomised how far this lad has come in such a short space of time. A year ago he was dreaming of playing in the Premier League now he's scoring goals in the toughest league in the world. What's he dreaming of now, an international call-up? At this rate it wouldn't be out of the question.