A draw at home to Norwich is not going to lift the pressure on Liverpool manager Brendan Rodgers but his team's performance at Anfield was much better than the result.

It was a display that should give Reds fans a glimmer of hope for the future, after a miserable few weeks.

Much of the criticism Rodgers has come in for this season has been because of the Reds' lack of goal threat and how isolated Christian Benteke has been up front.

Rodgers was accused of putting square pegs in round holes in last week's defeat by Manchester United when he used a 4-3-3 formation with Danny Ings and Roberto Firmino as wide players up front.

That was not the case on Sunday. Joe Gomez has been one of Liverpool's best players this season at left-back, but he was left out against Norwich because Rodgers went with wing-backs in a 3-4-1-2 formation that was perfect for Alberto Moreno, who loves charging down the left.

Just having Daniel Sturridge up front with Benteke gave the whole team an extra attacking dimension. It means Benteke is marked by one centre-half, not two, and Liverpool can also vary the way they attack if Benteke drops deep while Sturridge stays up, or vice versa.

It was not just Sturridge who was supporting Benteke against Norwich, though. Behind them, Philippe Coutinho and - in particular - James Milner attacked the penalty area from midfield too.

Like Moreno on the left, Nathaniel Clyne was looking to get forward down his flank and that gave Liverpool the width they have been lacking too. 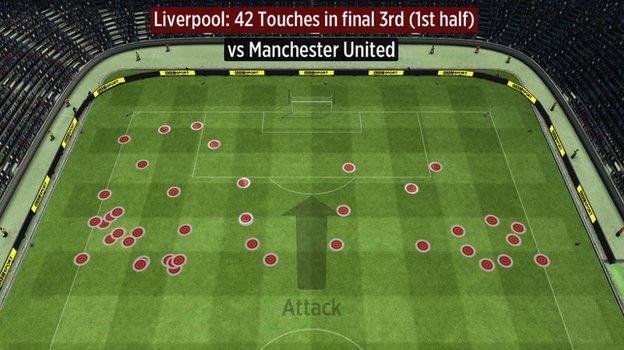 Unlike at Old Trafford last week, when Rodgers set up a team to contain their opponents, Liverpool's line-up against Norwich was designed to attack and score goals.

I know they were at home against the Canaries, not away at United, but straight away they all looked to get forward at every opportunity - in the first half, Liverpool players had twice as many touches in the final third of the pitch than they managed against United. 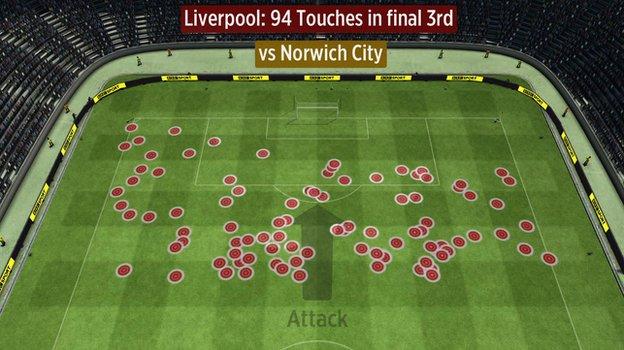 They did not score until after the break, but managed 12 touches inside the Norwich area inside the first 45 minutes, and crucially those 12 touches came from five different players - Benteke, Sturridge, Coutinho, Milner and Moreno - who had seven shots between them.

Against United, they had only two touches in the area in the same period - one apiece from Benteke and Emre Can, and did not manage a single shot on goal.

Even when Benteke came off at half-time, Liverpool remained positive and Ings, who was playing through the middle this time, put them ahead after running in behind the Norwich defenders.

Sturridge was always looking to do that too. He has not played since March but when he gets his sharpness back he will be even more difficult to stop.

They offered something that Liverpool have lacked in recent weeks, which has made them easy to defend against. Despite the result, they created more chances against Norwich than any of their previous league games this season.

Liverpool have balance at the back too

It was not only in attack where Liverpool changed things round.

They went from a four-man defence at Old Trafford to three at the back at Anfield, with Can dropping into defence from midfield.

The 21-year-old Germany international seems to be the sort of player who can pretty much play anywhere and make it look easy, and the other thing he brings to that position is the fact he can pass the ball so well and bring it out from the back too.

Mamadou Sakho appeared to be the odd man out not so long ago but he was made captain against Bordeaux in the Europa League on Thursday, then got given a new five-year contract.

Sakho was back in again on Sunday, for his first Premier League appearance of the season, and alongside Can and Martin Skrtel he looked a lot more comfortable than he does as part of a back-four.

It was Dejan Lovren who was left out, and I cannot say I am surprised. The Croatian cost £20m from Southampton and has had lots of opportunities but has never really convinced.

That does not mean there is no future for him, but I think the back three that Rodgers went with was the correct choice, and he definitely went with the correct formation.

Rodgers wants to find a way of playing Sturridge and Benteke up front together, and I think this is the best way of doing it.

Reds must beat Villa or the pressure will really be on

What Rodgers did against Norwich reminded me of when he switched to a 3-4-3 in December 2014.

He lost the first game he tried that shape in, against United, but it sparked a brilliant run of results.

Sunday was not the first time Rodgers has used a 3-4-1-2 with Liverpool in the Premier League but he has only done so on five occasions out of 120 league games in charge of the Reds, and had not tried it almost two years.

Again, he did not get the result he wanted against the Canaries, but if they play the same way - with this personnel and formation - they are going to win a lot of games.

That has to happen quickly, though. Failing to beat Norwich at Anfield means next week's home game against Aston Villa becomes very important.

I hate to use the term must-win but it will be no good if the performance is better than the result again in that game, because Liverpool have to take three points.

If they want to make the top four, Liverpool should absolutely be winning both games - if they don't beat Villa then the Merseyside derby at Goodison Park is next up and the pressure really will be on.