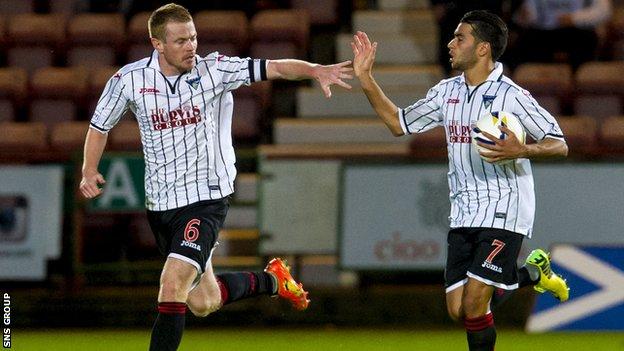 It's straight from the pages of Roy of the Rovers. A 20-year-old arriving in a foreign country, unable to speak the language and trying out a sport that is alien to him.

He then goes on to great success, scoring goals for fun on a weekly basis and is idolised by the club's supporters.

Welcome to the story of Faissal El Bakhtaoui, Scotland's leading goalscorer this season.

The Morocco-born striker arrived at Dunfermline in 2012 after then manager Jim Jefferies had been tipped off about the skills of a young man spotted playing futsal in the south of France.

"He came to see me in a game and then asked me if I wanted to come to Scotland and play in a trial game. I said yes okay and I came over for one week. After that Jim said he wanted me and I signed a contract for two years and then another two years."

Adapting to a new country and a new form of the game on a new surface took some time.

"I didn't play much in my first year as Jim had me on the bench to give me some experience," added the 22-year-old. "It's better now playing outside. Futsal is very quick and is a good level but it is nothing like professional football."

Faisal has scored 14 goals in 11 games this season, with Dunfermline topping the UK scoring charts on 41 goals so far.

The Pars knocked Dundee out of the League Cup in August and on Tuesday they visit Tannadice attempting to oust Dundee United from the same competition.

United got to the final last season but have struggled this term, scoring just eight goals.

On the same mark already is El Bakhtaoui's team-mate Joe Cardle, now in his second spell with the Fife club.

The 28-year-old midfielder was one of the players made redundant when Dunfermline were forced into administration in April 2013.

"It was really dark." Cardle recalls. "Getting told I had to leave the club was the worst day of my football career. It was honorific. I had two days to find a club for the end of the season.

"But I always thought I would come back to Dunfermline."

Cardle moved on briefly to neighbours Raith Rovers before a move to the top flight with Ross County, where he was limited to 11 appearances as a substitute.

"I think what I have been through has made me a better person, 100%," he said. "Even last season when I was not playing at Ross County you question yourself. The last three or four years have been up and down especially what went on here at Dunfermline."

With home crowds for the League One side on the up, Cardle reckons it will not be too long before the club is promoted.

"Everyone knows that Dunfermline is one of the top clubs in Scotland and I think the support this season has been absolutely fantastic," he adds. "When you get home crowds of over 4,000 in this league it's just incredible."