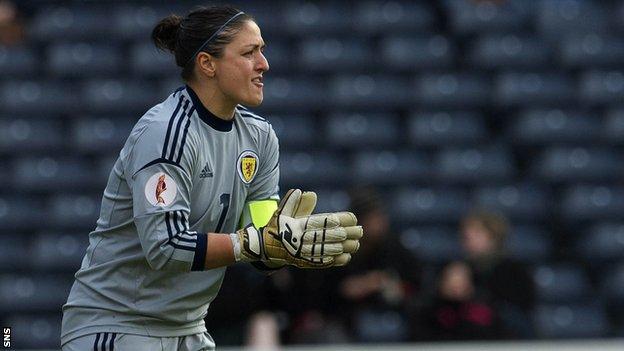 Scotland women's captain Gemma Fay admits the prospect of playing in a major championship was one of the main factors in deciding not to retire last year.

Fay, 33, should win a record 185th cap when Scotland play Slovenia in their opening Euro 2017 qualifier on Tuesday.

She made her debut in 1998 against the Czech Republic.

"The Holland matches were the first time I really took a step back to see if it was time to stop," Fay said.

Having played in eight major championship campaigns - all unsuccessful - Celtic keeper Fay had a big choice to make after Scotland lost over two legs to the Netherlands in a play-off for the World Cup in Canada.

"I asked myself several questions and the desire to reach a major championship was one of them," she said.

"If we qualify for Euro 2017 it will probably be the most special moment of my career."

Scotland, under coach Anna Signeul, have never been given a better chance. The draw - which includes Belarus, Macedonia and top seeds Iceland - is the kindest ever.

With the tournament in the Netherlands in two years time having been expanded, two teams will also qualify from most of the groups.

"Externally there is an expectation on us to qualify, but you can never underestimate any team," Fay said.

"We're not a team that has the arrogance to say we will definitely qualify. We are a team that says we know we have good players and we work hard in every game.

"We will give every team the respect they deserve. If we do that I'm confident we will do well in this group."

The Scots are based at Nova Gorica, which is almost on the Italian border, but the game is being played at Ajdovscina, some 30 minutes away.

"It's a beautiful setting," said Fay of a venue which lies in a valley under towering mountains.

"The pitch is a decent size for us and hopefully they will water it a bit before the game. It looks like a good place to start our campaign."