Wales women suffered defeat by Austria in their opening game of the Euro 2017 qualifying campaign in St Polten.

It was a disappointing result for manager Jayne Ludlow, in charge of her first competitive game after succeeding Jarmo Matikainen in October 2014.

Sarah Zadrazil was prominent early in the game for Austria and tested goalkeeper Joanne Price with an effort from outside the box.

The home side went ahead on 25 minutes when Price failed to deal with Carina Wenninger's free-kick and Schiechtl nodded home. 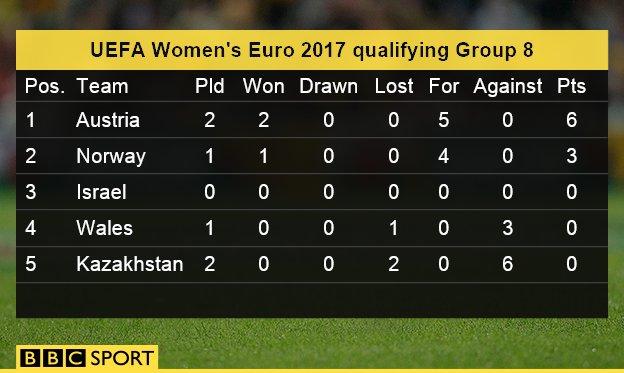 Nia Jones headed over the crossbar in response before Laura Feiersinger hit the woodwork and a second attempt saved by Price.

Ward replaced Melissa Fletcher at the interval and the Reading striker came close to equalising early in the second half but shot wide following good work by Fishlock.

Wales struggled with set-pieces all evening and they conceded again with 17 minutes remaining when Puntigam scored directly from a corner.

Wales' next game on 23 October is away to top seeds Norway, who earlier in the day began their campaign with a 4-0 win in Kazakhstan.

"There were many aspects I was pleased with but the fact that we got done by two set plays I'm not very pleased with.

"The last goal for them was a positional error so there are things we can correct and we can work on and build for the future.

"There were a few girls on that pitch who haven't experienced international football before so it was very pleasing to see their performances."