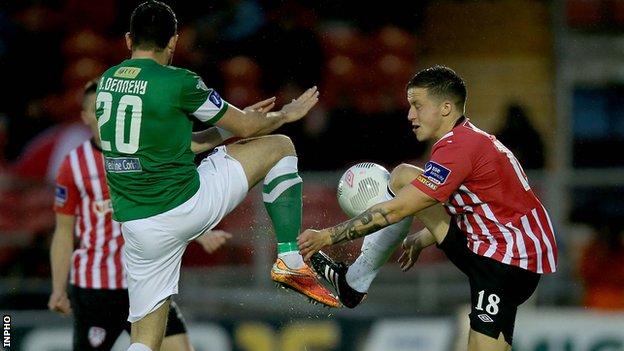 Derry City earned a valuable point in their battle against relegation after a scoreless encounter at Turner's Cross.

The Candystripes created the better chances with Conor McCormack and Ciaran O'Connor going close in an impressive first-half display from the visitors.

An unmarked Danny Morrissey headed wide for Cork with a minute remaining.

The draw takes the Brandywell side up one place to seventh although they are just six points off the bottom.

They made a bright start and keeper Mark McNulty was at full stretch to keep out McCormack's low shot.

A defensive error left O'Flynn clear on goal but a poor first touch allowed Patton to race out and make the save.

The busy O'Connor rifled across McNulty but just wide as Derry bossed affairs against a team sitting second in the standings.

Cork threatened twice on the restart, with a header from O'Flynn and Garry Buckley's toe-poked both directed straight at Patton.

Derry almost made the breakthrough when McNulty tipped Cillian Morrison's header into the path of O'Connor, but a superb last-ditch block by Bennett halted the ball's path into the net.

Cork substitute Morrissey wasted a late opening, left free at the backpost but failing to find the target.