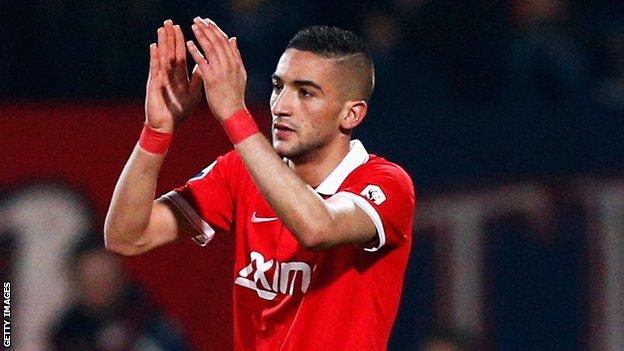 The battle between Morocco and Netherlands to secure the best young talent for their national teams has intensified after Hakim Ziyech announced his intention to represent the north Africans in two international friendlies in October.

Ziyech has dual nationality and the countries are engaged in tug-of-war over the 22-year-old midfielder, who was selected in Netherlands' squad for a Euro 2016 qualifier in June but withdrew because of injury.

The Twente Enschede player now appears set to represent Morocco in their upcoming friendlies against Ivory Coast and Guinea - although Netherlands coach Danny Blind is hoping to dissuade him.

Even if he appears for the Atlas Lions in the matches Ziyech can still make a choice about his international future as they are not recognised as competitive fixtures.

Ziyech is one of a trio of emerging stars in the Dutch Eredivisie to have roots in north Africa, along with Anwar El Ghazi and Oussama Tannane, who the Netherlands fear they will lose to Morocco.

It is easy to see why each nation is desperate to secure their services.

El Ghazi, 20, has scored seven league goals to propel Ajax Amsterdam to the top of the early season standings.

And the 21-year-old Tannane scored a wonder strike for Heracles Almelo last month which made him an instant You Tube sensation and he followed it up with four goals in a single half in his next match.

Tannane is also on a list of 33 provisional squad members named by Morocco coach Badou Zaki but previously said he was undecided about where to commit his international future.

The possibility of El Ghazi and Tannane also pledging their future with Morocco elicited extensive coverage in the Dutch media this week.

The Algemeen Dagblad led its sports pages with a headline that claimed Morocco were about to snatch away three "possible successors to (Wesley) Sneijder, (Robin) van Persie and (Arjen) Robben".

The newspaper said the Dutch football association KNVB faced a mini crisis as it attempts to build a new team from next year after the Euro 2016 finals, for which the Oranje might not qualify.

It suggested Blind take a leaf out of the book of coach Marc Wilmots from neighbouring Belgium, who two years ago handed a national team debut to Zakaria Bakali, who was 17 at the time, after he had played only two matches for PSV Eindhoven.

Bringing him on as a late substitute in the game against Wales was seen as a deliberate attempt to keep him from changing his mid and playing for Morocco instead.

Liege-born Bakali, who has since moved to Valencia, now cannot change his international allegiance.

El Ghazi and Tannane are currently in the Dutch under-21 international line-up, while Ziyech previously won three caps at the same level for the Netherlands.

But any player with multiple nationalities can change his allegiance after applying to world governing body Fifa as long as he has not won a senior cap in a competitive international.

But the Atlas Lions have missed out on Ibrahim Afellay, formerly of Barcelona and now at Stoke City, who is widely regarded as the top talent to come out of the Moroccan community in the Netherlands.

The competition between the countries shows no signs of abating, with Ziyech the current focus of their attention.