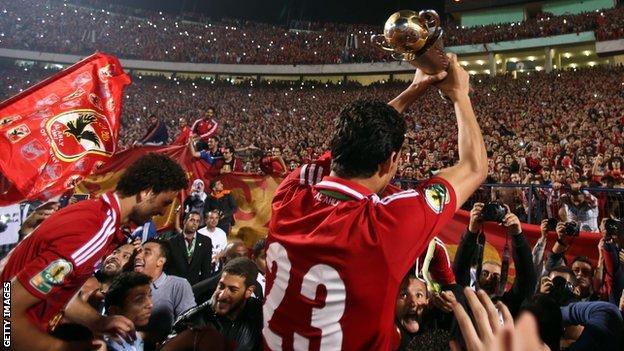 Ahly have home advantage for the second leg next Sunday in Suez while Zamalek host Etoile a day earlier in Cairo.

The two-legged final is set for the 20-22 November and a week later.

Ayman Hefny had halved a two-goal deficit with a goal midway through the first period, but it was a rare moment of joy for the Egyptian league and cup holders.

An early goal gave South Africa's Orlando Pirates a 1-0 victory over Al Ahly of Egypt on Saturday in their semi-final first leg.

Thamsanqa Gabuza was the ninth minute match winner against the title holders on a warm evening at Orlando Stadium in Soweto.

The tall striker connected with a low cross and, from an acute angle, steered the ball with his right foot just beyond the reach of goalkeeper Sherif Ekramy.

"Our first priority was to win without conceding a goal at home and we achieved that," said Pirates coach and former South Africa midfielder Eric Tinkler.

"We wanted to catch Ahly through counter-attacks, but our plan largely failed because we played the ball to the feet of our attackers instead of over the Egyptian defence.

"It is half-time in the tie and we are one goal ahead. Now we have to protect that lead and try and score some away goals."