FA Cup third qualifying round weekend is almost upon us and a competition that started eight weeks ago with 736 clubs is already down to 196.

Non-league clubs that do successfully negotiate this stage will be 90 minutes away from a potential money-spinning first-round tie against Football League opposition.

There is a midfielder who gets booed because he shares a name with a managerial great, a club close to Charlie Austin's heart, the manager who played for Ajax at 16, a boss who married the Arsenal Ladies goalkeeper and a roofer who cannot stop scoring.

BBC Sport takes a look at some of the stories behind this weekend's ties.

Check out this weekend's FA Cup third qualifying round fixtures.

Alex Ferguson: a name to provoke booing from many opposition fans up and down the country.

And it seems it does not matter whether it is the former Manchester United manager or a 21-year old playing for Chippenham Town. If that is your name and your nickname also happens to be Fergie, you are guaranteed an earful from the terraces wherever you go.

Former Swindon Town reserve midfielder Ferguson, 21, has grown accustomed to being heckled by opposition fans when his name is read out over speakers before games.

"I was born in 1994, the same year Manchester United won a league and cup Double, but I'm not a fan," Chippenham's Ferguson said ahead of his team's tie at Uxbridge, who play in the eighth-tier Southern League Division One Central.

"My dad and I both support West Ham United.

"But sharing the same name as the greatest manager of all time can work in my favour because people tend to take more notice of you.

"Whenever my name is read out over the speakers before a game I think 'here we go' because it always provokes a reaction from opposition fans.

"Sometimes it's good but there's always a few jeers too."

Chippenham, who play in the seventh-tier Southern League Premier Division, have lost only two of their 16 league and cup games this season.

It is six years since Charlie Austin last played for Poole Town but there are permanent reminders of the Queens Park Rangers striker's spell all around their Tatnam ground.

The Dolphins insisted on a sell-on clause and add-ons when Austin left for Swindon Town in 2009, after scoring 64 goals in 57 games.

It turned out to be a shrewd piece of business as his move from Swindon to Burnley 18 months later netted Poole £260,000, money the Southern League Premier Division outfit have since spent on ground improvements.

Two new stands have been built, with Austin delighted to help repay the club that he served on his way to the full-time game and a call-up by England in May.

"I didn't know anyone when I first joined Poole but they are a superb club, very friendly," Austin, 26, told BBC Sport.

"I was a builder at the time and was getting up early to do shifts and then getting down to training and play matches.

"It was a great stepping stone for me. They certainly gave me a platform to express myself.

"I still get down and watch them when I can. "

One of Austin's greatest memories at Poole was scoring a hat-trick in the FA Cup preliminary round in August 2009 to help his side to a 7-2 win over Barnstaple.

"It was nice to get the win more than anything - and a £30 goal bonus at £10 a goal. Taking that from the manager was very nice," he said.

Family commitments will prevent Austin from attending Saturday's game at Hastings United, who play in the eighth-tier Isthmian League Division One South.

But Austin will be willing on his former club, managed by his close friend Tom Killick.

From Cruyff to Rushall Olympic

Managing Rushall Olympic in the third qualifying round of the FA Cup is a world away from the glamour of playing alongside Marco van Basten, Frank Rijkaard and Ronald Koeman at Ajax.

Richard Sneekes was only 16 years old and still at school when Johan Cruyff sent him on for his debut in the closing stages of a 5-1 Dutch league win over Haarlem in October 1985.

With Cruyff spoilt for choice in terms of talent at his disposal, Sneekes was limited to three senior Ajax appearances.

But 30 years on, the former Bolton Wanderers and West Bromwich Albion midfielder is putting the philosophy drummed into him growing up with the Dutch giants to good use in his first permanent managerial job.

"A few weeks before my Ajax debut, the youth coach told me I was going with the first team," Sneekes told BBC Sport.

"I said I was too young and didn't want to go. I ended up sitting on the bench, it was about giving me experience.

"Six weeks later I found myself on the same pitch as Van Basten, Rijkaard and Koeman.

"After the game I had to ask someone if I was allowed in the players' lounge. I was 16 and had school the next day."

Sneekes, who played in Bolton's 2-1 defeat by Liverpool in the 1995 League Cup final, has been manager at Rushall, on the outskirts of Walsall, since May 2014.

"Everything I learned at the Ajax academy is in my DNA," added the 46-year-old. "It is a challenge to see if I can make my philosophy work at this level.

"Obviously the pitches start to turn in December and January but you will never hear me say to my players 'just hoof the ball'."

The chicken dance that came home to roost

"I was rubbish as a player in the FA Cup," replies Marcus Bignot when asked to recall his biggest moment in the competition.

The former Queens Park Rangers defender, now manager of ambitious National League North leaders Solihull Moors, does remember one amusing moment in 1993 after scoring for non-League Telford United against Huddersfield Town in the first round.

"It was on Match of the Day and I was voted 'Celebration of the Week'. I think it was a chicken dance, it's embarrassing now," he said.

"The next day I was playing a Sunday League game and the opposition scored.

"They celebrated... with a chicken dance. They must have all stayed up the night before and seen my celebration on Match of the Day."

Bignot, 41, has been putting a smile on the faces of fans at Solihull Moors since being appointed manager in 2011.

The club, formed in 2007 as a result of a merger between Moor Green and Solihull Borough, have grown both on and off the pitch in four years under his guidance.

"In 2011 there were two teams - the first team and the under-18s. Now we have 32 youth teams alone," said Bignot, ahead of his side's home tie with Worcester City, who also play in National League North.

He is putting all he learned from each into practice.

Bignot also believes a long stint in charge of Birmingham City Ladies, while he was still playing full-time, has also proved invaluable.

Married to Arsenal Ladies and Republic of Ireland goalkeeper Emma Byrne, Bignot added: "Women's football has been massive in my development as a manager.

"It's no secret I want to manage full-time in the Football League.

"I could have moved last year to a bigger club, but if I achieve what I want to achieve at Solihull Moors then it will be much more satisfying."

Craig Bannister has got plenty to shout from the rooftops about after scoring nine times in four FA Cup qualifying ties this season.

The 30-year-old self-employed roofer retired from playing after breaking his leg twice in the space of 18 months between 2010 and 2012.

Fast forward three years and Bannister's remarkable scoring form has propelled ninth-tier side Sporting Khalsa, based in the Black Country, on their best ever run in the competition.

"I have a young family to support and the second time I broke my leg, playing for Rushall Olympic, that was it, I was finished," the Manchester United fan told BBC Sport. 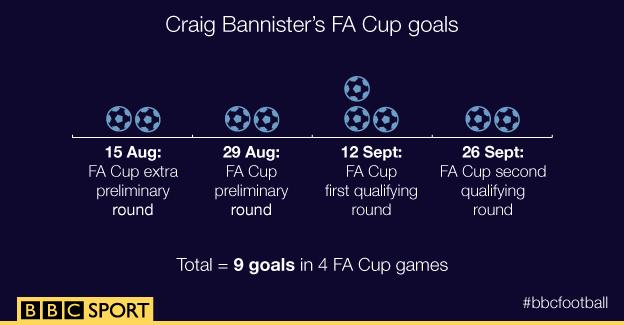 "I'm self-employed and I couldn't earn money with a broken leg.

"I went to watch some non-league games and started to get itchy feet again. I spoke to the doctors, got the all-clear, and then managed to convince my wife.

"I got myself fit and haven't looked back."