Aguero calmly slotted into the corner as City bounced back from defeat by Juventus in their opening Group D tie.

City keeper Joe Hart saved a first-half penalty from Raffael but was powerless to stop Lars Stindl precisely side-footing in the opener from 15 yards.

Defender Nicolas Otamendi volleyed in the equaliser before Aguero struck.

City remain third in Group D, level on three points with Spanish side Sevilla, but three adrift of Juventus.

The Italian champions, who won 2-1 at Etihad Stadium earlier this month, have maximum points after beating Sevilla 2-0 in Turin.

Aguero's late winner - after the Argentine was tripped by Monchengladbach's Fabian Johnson - make the early standings look much healthier for a City side aiming to progress past the Champions League last 16 for the first time.

But had it not been for an impressive display by returning goalkeeper Hart, Manuel Pellegrini's side might not have found themselves in the position to be pushing for a late winner.

Hart returned to the side after a back injury kept him on the bench for Saturday's defeat at Tottenham - where replacement Willy Caballero was criticised for his part in two of the home side's four goals.

And Hart produced a commanding display in Germany to show why he is so integral to his side's ambitions.

As well as stopping Raffael's first-half penalty, the 28-year-old spread himself to deny the Brazilian and also stopped Patrick Herrmann when sloppy defending allowed the pair to burst through on his goal.

But although they contributed significantly to the visitors hogging 65.4% of the possession in Germany, the quartet struggled to find their fluency in the final third of the field.

Aguero, who has only managed one goal from open play this season, wasted an excellent chance inside the opening five minutes, sliding Sterling's low cross from the left against the legs of home keeper Yann Sommer.

The Argentina forward, who had eight shots - more than any other player - also dragged two first-half efforts wide.

But he kept his cool when it mattered to score his 15th goal in his last 15 Champions League starts for City. 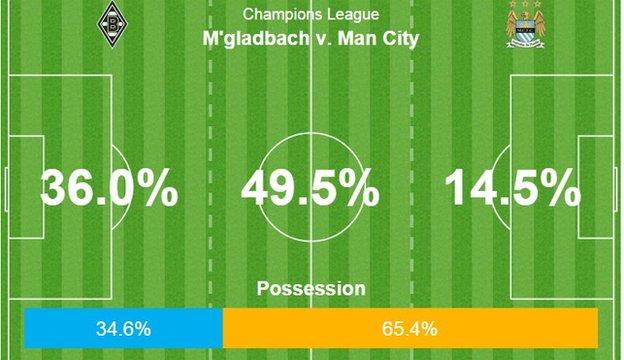 City have won two Premier League titles in recent seasons, but have famously struggled to find the right formula to progress into the latter stages of the Champions League.

The Blues have been eliminated at the last-16 stage by Barcelona in both campaigns under Pellegrini, who insisted in his pre-match news conference that losing to the "best team in the world" was not a failure.

But they will struggle to go deep into the latter stages if they produce similarly shaky defensive displays against better teams than Monchengladbach.

City were again without injured skipper Vincent Kompany and, in his absence, were sliced open too easily by the home side.

However, thanks to Hart and Aguero, Pellegrini's side earned only their third win in their past 12 Champions League matches.

Man of the match: Joe Hart

Manchester City goalkeeper Joe Hart: "We didn't play well today, we were disjointed as we had been in the last few games.

"But we deserved to win. We had some really good chances. It may have come late but Sergio Aguero is a cool guy and he will score."