Arsenal and Chelsea slipped to defeat on another night of Champions League embarrassment for the English elite - grim statistics lying around their feet like rubble, proof that the glory days are over.

The Premier League's finest have so far played six group games in Europe's biggest tournament and five have ended in defeat. Manchester City and Manchester United play their second games on Wednesday having both lost their first.

So where has it all gone wrong? And is this a sign of things to come?

From 2005 onwards, when Liverpool famously came from three goals down to beat AC Milan on penalties in Istanbul, the power of the Premier League cast a giant shadow over the Champions League - now the aura has been stripped away and those who once ruled are reduced to the ranks.

Arsenal were defeated finalists against Barcelona in Paris in 2006 and even though AC Milan got revenge on Liverpool in Athens the following year, Manchester United and Chelsea were also in the last four.

Manchester United won an all-Premier League final against Chelsea in Moscow in 2008, with Liverpool also semi-finalists, while both those finalists were in the semis again, along with Arsenal, in the following year before Sir Alex Ferguson's side lost to Barcelona in Rome.

Slowly but surely, however, the Champions League has since been a tale of diminishing returns for the Premier League, overtaken not just by La Liga giants Real Madrid and Barcelona, but also Bayern Munich and more besides.

United reached the final in 2011, while Chelsea won the Champions League almost freakishly against Bayern in their own Allianz Arena a year later - but there was no Premier League presence in the last eight in 2013 and 2015, with only Chelsea reaching the semi-final in the intervening year.

Whereas once a meeting with Premier League clubs may have been daunting, it is now greeted with relish and not only the big names fancy their chances.

Arsenal have been unseated by unfancied Croatians Dinamo Zagreb and Olympiakos so far this season, while Chelsea have been beaten by FC Porto, Manchester United by PSV Eindhoven and Manchester City by Juventus.

None of those teams would figure in anyone's thinking as potential winners this season. Juve won at the Etihad and, while they were last season's finalists, they are struggling desperately in Serie A, sitting 15th with five points from six games. 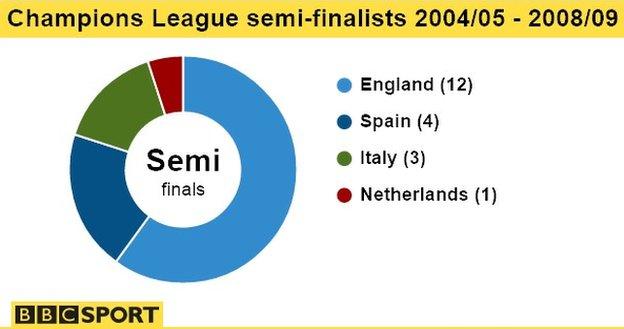 Past reputations count for nothing. The Gunners may be most embarrassed of all. They are bottom of Group F and look in serious trouble before they have even faced their two toughest games against Bayern Munich.

Olympiakos arrived at Arsenal on the back of run of 12 straight losses in England and had never won a Champions League game on this soil. The record has now been set straight.

The Premier League can bill itself as the best in the world and boasted the richest summer transfer window in history in 2015, with outlay passing £870m - the total calendar year spending also soared past £1bn for the first time - but it seems this is very much a case of The Emperor's New Clothes for their European rivals.

Is the Premier League taking its toll?

So unpredictable that they cannot rest their best players for Europe - but then again, do Barca really rest players regularly?

One significant transfer deal that did not happen may hint at why life in the Champions League is getting tougher for those who want to exercise European as well as domestic domination.

When Chelsea set their sights on Everton's 21-year-old England defender John Stones, the assumption was that for all the defiance coming out of Goodison Park the deal would be done.

After much public rancour and three offers escalating to £30m and a willingness to go higher, Everton told Chelsea there were things money could not buy and Stones was one of them.

Chelsea did not get their way and defensive frailties were exposed once more in defeat by Porto - frailties manager Jose Mourinho wanted Stones to cure.

Everton, however, were able to take a stand against Chelsea, emboldened by the fact they were bolstered against the need to sell for financial reasons because, in February, the Premier League sold TV rights to its games for £5.136bn - 71% above last time. The deal runs for three years from 2016.

It is no longer quite so easy for the bigger clubs to put the squeeze on their so-called lesser Premier League rivals to sell, while those clubs are now in a position to make ambitious moves of their own.

The landscape is shifting. The Premier League may not be the best league in the world but it is arguably the most competitive - and this may take its toll when it comes to Champions League time.

The stats back up the argument. Chelsea were champions last season but only won four league games by three or more goals. Barcelona won 15 games by at least three goals as they won La Liga and Bayern Munich did so 11 times winning the Bundesliga.

Where does the world-class talent go?

The Premier League might be awash with cash but are they getting better? Can they attract world-class talent?

Cristiano Ronaldo, Sergio Ramos, Karim Benzema etc were linked with moves to English clubs but none arrived. Kevin de Bruyne? Is he the nearest - and if so, what does that say? Do they have to settle for the top young talent rather than top proven talent? Almost second tier. Will those younger players end up at Real, like Ronaldo did?

Did Ronaldo's £80m move from Manchester United to Real Madrid days after their 2009 Champions League final loss to Barcelona signal the beginning of the end for the Premier League's great European era?

Since then it has been accepted that the greatest talent lies in Spain with Ronaldo at Real and Lionel Messi at Barcelona - while another true, albeit flawed, superstar left the Premier League when Luis Suarez left Liverpool to move to the Nou Camp for £75m in summer 2014.

Gareth Bale had already made the journey from Spurs to Real for a world record £85m in September 2013, while it is almost impossible to see a similar deal coming the other way.

So the Champions League has its superstars. The Premier League's problem is that not enough play for its clubs any more.

Chelsea prised Cesc Fabregas from Barcelona in 2014 but only after he had outlived his usefulness at the Nou Camp - similarly when Alexis Sanchez moved to Arsenal. Mesut Ozil signed for Arsenal in 2013 but again only when he was unwanted at Real.

Even when Manchester United paid £59.7m for the ill-fated Angel Di Maria after he had starred for Real when they won the 2014 Champions League final against neighbours Atletico Madrid, it was because it was decided within the Bernabeu that he was surplus to their needs.

Manchester United have been linked with Real Madrid's Ramos and Thomas Muller from Bayern Munich. They ended up with Bastian Schweinsteiger from Bayern, a fine player but a deal only done because the Germans felt his day with them was done.

Unless there is a freak of circumstance, it takes world-class players to win the Champions League - and more of those currently reside outside the Premier League.

Add the loss of that fear factor that now means even the lesser European lights face Premier League opposition with optimism and it means struggle.

So will it get any better for the Premier League clubs?

Manchester United manager Louis van Gaal certainly thinks so. When asked if United can improve enough to win the Champions League by 2017, he said: "I hope so. That is realistic."

There is little doubt United will still try to pursue the marquee stars that currently elude them to make that happen, while Chelsea owner Roman Abramovich still has the power to make the big deals when it tickles his fancy.

Arsenal's performances in the Champions League in recent times offer no serious hope they will make a dent in the later stages - while realistically the best bet should be Manchester City.

City's Abu Dhabi-based owners have the finance and ambition to match any club in the world and it is clear they are intent on eventually winning the Champions League.

And yet, despite a multi-talented and hugely expensive squad, and perhaps because they are in a relatively early stage of their development, they have struggled to make an impact. They have not reached the last eight and too often look uncomfortable in their own Champions League skin.

Defeat by Juve at home does not augur well for this season, but the feeling remains that they must get better eventually.

For now, however, it seems the Premier League must be content with a place among the also-rans.

Will things get worse?

Very possibly. The Premier League is in danger of losing a fourth Champions League spot in the 2017-18 season if poor European performances continue.

New coefficient rankings, by which places are decided and calculated by performance over a five-year period, show England are third behind Spain and Germany but Italy are closing in.

It increases the urgency for English clubs to get it right - but that grim record of five defeats in six group games so far does not send out an optimistic sign that things will get better as the Premier League's reputation in Europe takes more punishment.