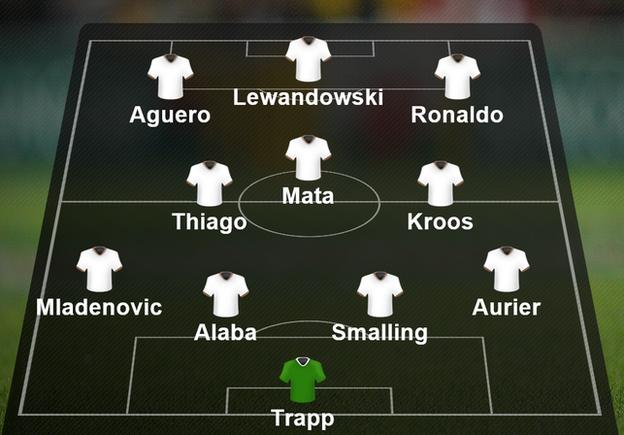 Bundesliga champions Bayern Munich form the spine of this second Champions League team of the week after their superb 5-0 win over Dinamo Zagreb.

And Cristiano Ronaldo - who extended his lead at the top of the all-time Champions League goalscoring charts with two more for Real Madrid - keeps his place.

See the team from matchweek one here.

Joe Hart may have saved a penalty for Manchester City, but Trapp has kept two clean sheets in his first two Champions League appearances for PSG, who are second in Group A behind Real Madrid. Trapp, 25, joined the French champions this summer from Eintracht Frankfurt.

PSG right-back Serge Aurier scored and provided an assist on his Champions League debut as the French champions beat Shakhtar Donetsk 3-0. Aurier came to prominence with some impressive displays during the 2014 World Cup for Ivory Coast.

Chris Smalling continued his fine start to the season by netting for Manchester United against Wolfsburg. His strike - from Juan Mata's clever flick-on - proved to be the winner as United recovered from their opening loss at PSV Eindhoven.

Bayern Munich have started the season in imperious form, putting five past Dinamo Zagreb on Tuesday. Austrian Alaba may not have had too much defending to do, but his 113 passes were the most by any Bayern player in the Champions League so far this season.

Filip Mladenovic is the first BATE Borisov player to net two goals in a Champions League match, opening his account with a swerving long-range strike that caught out Roma's on-loan Arsenal keeper Wojciech Szczesny. Their win keeps them in contention, a point behind Group E leaders Barcelona.

Thiago Alcantara was a target for Manchester United in the summer of 2014 and was recently linked again with a move to the Premier League, The former Barcelona man was at his best against Dinamo Zagreb, creating a goal for Robert Lewandowski with a superb flick.

Another man who Manchester United tried - and failed - to recruit, former Bayern man Kroos kept the game ticking as 10-time winners Real Madrid beat Malmo 2-0. Real are top of Group A with two wins from two - but face PSG in their next two games.

Juan Mata has now scored three goals in his past four games, with the Spain international handed the responsibility from the penalty spot to draw Manchester United level after Wolfsburg had taken a shock early lead at Old Trafford. He also created the winner for Smalling after the break.

Ronaldo has had a good week - but it's nothing compared to Bayern Munich's number nine Robert Lewandowski. The Poland international helped himself to a hat-trick against Dinamo Zagreb and has now scored 10 goals in his past three games in all competitions.

Sergio Aguero was guilty of missing two good first-half chances as Manchester City laboured against Borussia Monchengladbach. But as City improved in the final half-hour, the Argentine won - and then converted - a crucial last-minute penalty to give Manuel Pellegrini's side their first win of the competition.