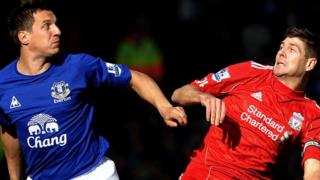 Watch a selection of memorable Merseyside derby goals as Everton host Liverpool on Sunday in the Premier League.

They include Steven Gerrard's header at Anfield in 2014, Tim Cahill scoring in 2010, Gary McAllister's free-kick in 2001, Duncan Ferguson in 1994, Michael Owen in 2003 and Phil Jagielka's screamer last season.