It is obviously hypothetical because he is a proud captain of Wales but I think Ashley Williams would walk into the current England side.

If there was such a thing as a British XI, there is no doubt he would be in as a centre-half right now.

Williams has been outstanding for Swansea City for a number of years now but, at 31, he is finally getting the recognition he deserves.

A big reason for that is the key role he has played in Wales being on the brink of reaching Euro 2016.

Gareth Bale has scored six of our nine goals in qualifying, but that is only half the story, because Wales have kept six clean sheets in eight games in Group B.

They have conceded just twice - none from open play - and out of the 53 teams in the competition, only Romania have let in fewer goals.

It is an extraordinary defensive record that should see us clinch our place in France within the next few days and Williams, who has not missed a single minute of this campaign, is right at the heart of it.

He lives at the bottom of my road and I know him very well, but I am not wearing my Swansea hat or speaking as his friend when I emphasise how good he is, because the statistics and his achievements back it all up.

'A magnificent leader of men'

Williams joined Swansea the same year he made his Wales debut, in 2008, and since then I have watched him very closely.

I have worked with him too. I was part of the Wales coaching set-up when the decision was made to make him skipper in 2012 and I could see how much it meant to him.

He takes massive pride in his role.

As a former Wales captain myself, witnessing how he has handled the responsibility of the job has been magnificent.

I have seen him in the dressing room and on the training pitch and he is very vocal.

He will always come forward and discuss things with the other players or the manager Chris Coleman and he is never frightened to have his say.

In that way he reminds me of Tony Adams, with whom I played at Arsenal when they had one of the finest defences British football has ever seen.

Adams was a magnificent leader of men. He led by example and showed us the standards we all had to meet.

Williams is exactly the same - and I can offer him no higher praise than that. You could not ask for a better captain.

'Strong, fast and great on the ball'

Williams is a top defender because he can handle whatever type of striker he is up against - and he also has a bit of class about him too.

He is very similar to another former Gunners team-mate of mine, Martin Keown, in that he will be up for a fight with the opposition centre-forward if required.

If someone wants to be physical, Williams will be rubbing his hands together saying 'bring it on'.

But that is not the only way he can play. If he is facing a striker who prefers to drop away from him and find some space, his pace means he is comfortable in that situation too.

Where he is different from most defenders is that he can be silky too and play out from the back in the way few centre-halves can.

When we put on 5-a-side sessions of keep-ball in Wales training sessions, Williams hardly ever gave it away. He stood out - and that was with players like Bale, Aaron Ramsey and Joe Allen involved.

The way he strikes the ball is exceptional and his range of passing is some of the best I have seen from a defender.

I remember Neil Ruddock used to ping diagonal balls 50 or 60 yards with his left foot out to the right wing during his Tottenham and Liverpool days, but Williams can do it with either foot.

He knows when the ball needs to go into Row Z but few Premier League defenders use the ball better than he does. His passing accuracy of 88.75% this season is the fourth-best in the top flight.

His intelligence is another strength. You only have to look at his stats for blocks and clearances over the last couple of seasons - where he has led the way in the entire Premier League, let alone just British players - to see how good his positional sense is.

His consistency is impressive

I am waxing lyrical about Williams, but I am not alone - every current and former player I speak to tells me what a player he has become.

He did not even play as high as Championship level until he was almost 24 but he has kept getting better over the last seven seasons.

For many years John Terry and Rio Ferdinand led the way as the top British defenders in the Premier League, but Ferdinand has retired and it looks like age is catching up with Terry too. 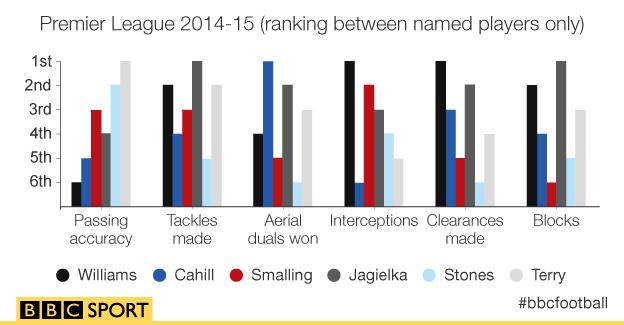 Now I look at who else is around as a challenger to Williams and it is obvious Everton's John Stones is going to be a very good defender while Chris Smalling has come on a lot for Manchester United this season.

Phil Jagielka is always strong for Everton and Gary Cahill at Chelsea is usually very reliable too, but like Terry he has been in and out of their team this season.

Consistency is hugely important for a defender and it is there that Williams really comes into his own, because his form rarely dips. 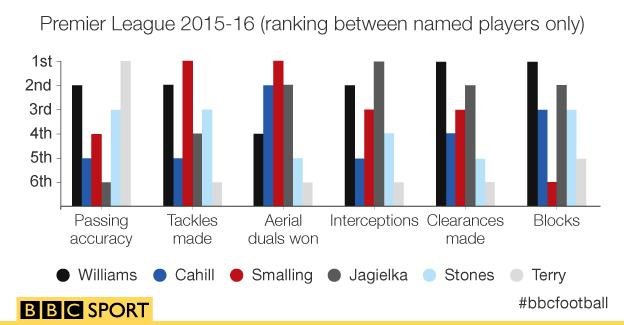 He is hardly ever suspended and plays through his injuries, so he rarely misses a game for either his club or his country, so Wales have been able to build their backline around him no matter what system they play.

Swansea have done the same. The statistic showing how few minutes Williams has missed since he first played Premier League football in 2011 is staggering. No other top-flight outfield player can compare.

I used to look at the amount of money that the top Premier League clubs would spend on centre-backs without solving their defensive problems and wonder why none of them went for Williams, even if I was obviously pleased he stayed at Swansea.

But it would not surprise me if some of the rumours I have heard about bids from Liverpool and Arsenal - among others - in the last few months are true.

While Swansea realise he is too important to let him go, his loyalty is a big factor in him staying too. If Williams had wanted to leave, I am sure he would have done, but he has found his home in Swansea, so why would he?

He is captain of his club and his country so it's no wonder he is happy, and things will get even better when he leads Wales into their first major finals since 1958.