Theo Walcott wants to be given a chance in attack for England if Wayne Rooney fails to recover from an ankle injury to face Estonia at Wembley on Friday.

Manchester United captain Rooney may be left out of the Euro 2016 qualifier after missing two training sessions.

Arsenal forward Walcott, 26, has been used largely on the right by England manager Roy Hodgson.

"I know everyone would like to see me up front," said Walcott. "Playing there for England, that's what I want to do."

England secured qualification for the finals in France with a 6-0 victory in San Marino on 5 September.

Three days later, Rooney became England's record scorer, reaching 50 goals for his country with a penalty in a 2-0 win over Switzerland.

Walcott thinks that Rooney, who will turn 30 on 24 October, can move into a midfield role as he gets older.

"He's still improving," Walcott said. "You've seen it with Manchester United. He's dropped into midfield and there's a role there.

England, who have won all eight of their Euro 2016 qualifiers to date, are seeking to complete a perfect campaign by beating Estonia on Friday and Lithuania in Vilnius on Monday. 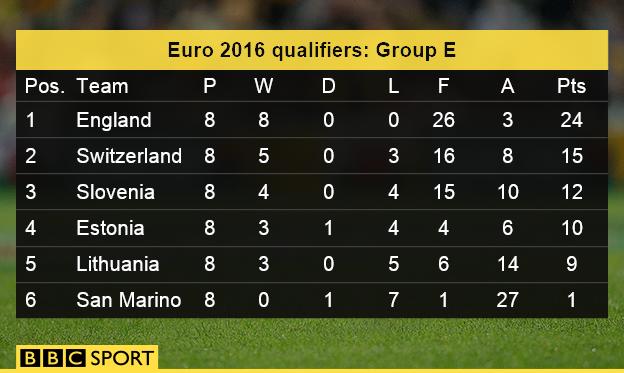 Walcott, who has scored four goals in seven appearances for his club this season, has credited Arsenal's record scorer Thierry Henry for helping him develop as a striker.

Henry, who scored 228 goals and won two Premier League titles with the Gunners, has been coaching the club's Under-18 team this season.

"Thierry is with the Under-18s and at times I think some of them don't even know who he is," Walcott said.

"He has just given me his analysis on myself. If I've needed to ask him some questions about it, he's always there."

'Wenger brought out my aggression'

Walcott says he has also benefited from Arsenal manager Arsene Wenger telling him to be more aggressive.

"It clicked about going up front when Arsene told me he wanted me to be more aggressive on the pitch," Walcott added.

"I actually said: 'Do you want me to start kicking people?' That was my first reaction. He said: 'No, I'm not saying that.'

"He wanted me to be more aggressive in terms of running at players, closing them down, tracking back, being there and in their faces."