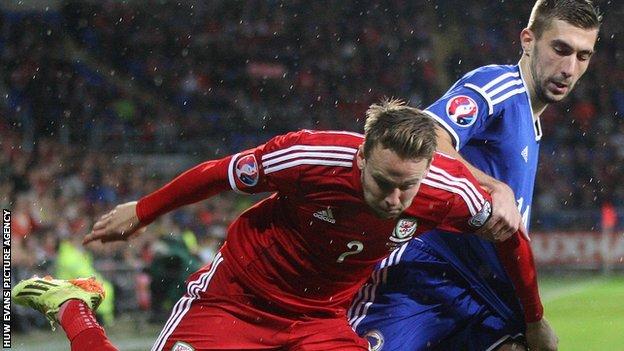 Wales will use the pain of past failures as inspiration to reach the Euro 2016 finals, says Chris Gunter.

A point in Bosnia-Herzegovina on Saturday or at home to Andorra three days later would see Wales end their 57-year absence from major tournaments.

Gunter, 26, believes the current side can deliver where previous generations have fallen short.

"It's been a hard time. We aren't the biggest nation but we've probably underachieved," said the defender.

"I remember Romania [1993] and the Russia campaign [2003], the closer we get over the years, the more these questions seem to come.

"It's nice to be involved in the right sort of scenarios towards the end of the group. We played Belgium when they celebrated getting to the [2014] World Cup and we've put ourselves in that position now."

Wales are a point clear at the summit of Group B, with the top two teams qualifying automatically for Euro 2016.

Even if they lose their final two qualifiers - unlikely as Andorra have never won a competitive game away from home - Wales would still reach next summer's tournament if Israel fail to win both of their remaining fixtures against Cyprus and group favourites Belgium.

With the insurance of a home game against Andorra on Tuesday, the odds of qualification are overwhelmingly in Wales' favour.

But Gunter is mindful of previous failures and says Wales will be aiming to seal their place in France with a positive result against Bosnia on Saturday.

"The near misses are there as a reminder that in football even the most unlikely thing can happen until the job is done," he added.

"We've worked so hard for so long, it'd be a massive mistake to get complacent and think the job is done.

"If we start thinking we'll be celebrating on Saturday night we'll be caught out. It's a really tough game. We have done well because we've always prepared in the right way.

"Until we've qualified we have to concentrate as anything can happen."

Gareth Bale has been integral to Wales' recent success, scoring six of their nine goals in this campaign, and a calf injury had made the Real Madrid forward a doubt for the forthcoming double-header.

But he returned for his club side against Atletico Madrid on Sunday and is expected to feature against Bosnia and Andorra.

"Gareth is here, he's fit, he's done the same as everybody else. It's brilliant news for us and the gaffer [Chris Coleman] as well," said Gunter.

"I don't think if he's fit and here we'll look beyond the game at the weekend. It'd be a brave man to tell him he's not playing Saturday!

"If he's fit I'm sure he'll be involved and hopefully in the same form as the rest of the campaign."