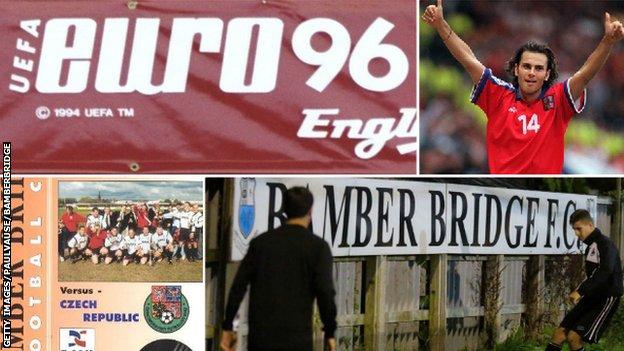 The year, of course, was 1996. With England's European Championship campaign ending in penalty defeat, it was tournament debutants the Czech Republic who claimed a place in the hearts of a nation.

From 66-1 outsiders at the start to almost upsetting Germany in the final, the Czechs had come so close to completing the perfect underdog story.

And it all began at Bamber Bridge.

"I was mowing the pitch when I was called in to take a call from a nearby hotel," remembers Russ Rigby, former groundsman, secretary and kitman at the non-league side, who are in FA Cup action this weekend against Kettering Town.

"It was the hotel's manager and he just asked if we would be interested in playing the Czech Republic in a warm-up game for the European Championship."

Rigby recalled he almost dropped the phone in surprise. After all, it is not every day that a team that has never played higher than the sixth tier of English football gets presented with the opportunity to play an international side.

Needless to say the offer was quickly accepted, but why exactly did a team containing emerging talents like Pavel Nedved, Karel Poborsky and Patrik Berger sound out a non-league side from the north west of England for a friendly?

"They were playing Germany in their opening game of Euro '96 at Old Trafford a few days later, so they were based close by," adds Rigby.

"Preston North End had been approached initially but didn't want the game for some reason or another, so they passed on my number."

Dusan Uhrin, the Czech Republic manager, travelled to the Lancashire village to check out the facilities and complete the formalities of arranging the friendly.

"We'd had the pitch relaid. It wasn't perfect but it was all right," says Rigby.

"The Czech manager didn't speak any English so we had to go through an interpreter, but he was happy with the surface.

"He warned us, though, that he didn't want a physical game, otherwise he'd take his players off if it got out of hand."

Back in the Czech Republic, there was plenty of interest in the game.

The country's national team was playing in a major tournament for the first time since Czechoslovakia split in 1993 into two independent countries, the Czech Republic and Slovakia.

"The game was being broadcast live and all the newspapers were in touch," continues Rigby.

"The Czech Republic team was sponsored by one of their local breweries too. One of the stands wasn't really a stand, just a shed really, and this brewery got in touch to say they would bring a bar over.

"So a temporary stand was built which included a bar that served their beers. I still have some of the fancy glasses they brought over."

The game itself was sold out. Bunting lined the streets while a brass band played as Bamber Bridge's opponents arrived.

For a group of players who would just a few days later be playing in front of almost 40,000 people at Old Trafford, it must have been quite a culture shock.

"They were so nice and down to earth," says Rigby. "They could not do enough for us.

"I remember they had a midfield player, who went to Liverpool, dark-haired lad - Patrik Berger. Lots of girls came to see him because he was a good-looking bloke.

"He was definitely a favourite for some of the crowd."

The result, not that it mattered, was a resounding 9-1 win for the Czech Republic.

"Our goal was an absolute beauty though," Rigby adds. "I took a call from a friend afterwards, asking what the score was. I told him 9-1. 'Who to?' he asked, so I said 'who do you think!'"

That memorable encounter with the Czech Republic happened during a period of success for Bamber Bridge.

They won the Unibond Premier League - one division below what was then the Conference - in 1996 but could not get promoted because their ground did not meet requirements.

In 1999 they progressed all the way to the second round of the FA Cup, the furthest they have ever been, where they suffered a narrow loss to Cambridge United.

On Saturday they travel to Kettering Town, knowing they are just two wins away from reaching the first round proper of the tournament for the first time since that run 16 years ago.

It will be tough, but they do boast players in their ranks with strong FA Cup pedigree, namely former Manchester City forward Jon Macken and ex-Southampton striker Brett Ormerod.

Macken scored one of the most memorable goals in the tournament's history - the winner as Manchester City came from 3-0 down to beat Tottenham 4-3 in a stunning fourth round encounter back in 2004.

Ormerod, meanwhile, is an FA Cup finalist, collecting a runners-up medal when Southampton lost to Arsenal in the 2002-03 final.

"It was definitely one of the highlights of my career," Ormerod says of that game, which was settled by a Robert Pires goal. "We didn't win that day but it is every kid's dream to play in the final of an FA Cup and I did it.

"There were 70,000 at the Millennium Stadium and it was the first time the roof was closed, so the atmosphere was amazing. We played well on the day but it was not to be."

Reports had suggested Ormerod, 39, had been preparing for life outside of football by opening a sandwich shop, a story that is partly true.

"We have bought a Subway franchise - well my wife has," he says.

"I won't be working there. I had read in some places that I'd be serving sandwiches but I don't think anyone would want a sandwich made by me anyway."

Instead, he was convinced to play on for at least one more season by his former Preston team-mate Paul McKenna, who plays for Bamber Bridge.

And Ormerod is hoping to enjoy one final piece of FA Cup success before he ends his football career.

"Football is a young man's game and it is getting tougher on the body but you are a long time retired," he adds.

"If we can enjoy a cup run while I am here that will be a bonus."