An outstretched toe that squeezed the ball agonisingly over the goal-line in the final seconds has kick-started another round of national introspection.

Robert Lewandowski's equaliser at Hampden Park sent Scotland spinning out of the running for Euro 2016 qualification and left a country's football fans reeling from the impact.

As heads cleared amid the sobering autumn rains of Friday, attention turned to how the Scottish football community - and manager Gordon Strachan in particular - would react as they reeled from the impact.

While the great and good pontificated on TV, radio and online, @BBCSportScot posed the question: "Why do you think Scotland failed to qualify for Euro 2016?" Here's what you had to say there and the BBC Sport Scotland Facebook page.

Defeat in Georgia was crucial

There was near unanimity that September's 1-0 defeat in Georgia was where Scotland's challenge started to crumble.

A victory in Tbilisi and Strachan's side would have been travelling to Gibraltar on Sunday still with a chance of at least a play-off place...

Defensive errors and lack of goals

The Twitterati and Facebookers are not too happy with Scotland's players, being particularly critical of the defence...

Bobby Watson on Facebook: "This campaign has been dogged by an inability to close out games, retain possession at key moments and dominate games against weaker opposition. Everyone except Gibraltar won in Georgia. We limp to a shocking defeat.

"But, hey, it's typical Scotland. We huffed, puffed, showed character and bravery. That's better than being technically and tactically better than the opposition!"

Sam Thomson: "This was always going to be a tough group. Germany and Poland are clearly significantly stronger than us and Ireland are arguably slightly better.

"The loss to Georgia stands out as the one irredeemable failure, the inability to pick up anything against Germany on both occasions does in hindsight considering they were a shadow of themselves in this campaign.

"Composure remains the ever-present problem, inability to hold onto a lead when pressure is mounting or grind out a result when it matters. Twice we led Poland 2-1 in the late stages of the game and twice we failed to shut up shop and run down the clock."

Manager Strachan gets it in the neck too...

Dom Morrison: "I don't dispute what Strachan has done in the game and I am not saying he is a bad manager, but I find some of his selections and decisions quite baffling.

"He is too loyal to certain players when he should be playing in-form players. He obviously has his favourites while overlooking others like Charlie Adam to name one who is as good or better than other midfielders we have.

"Also, why could he not have played Griffiths and Fletcher together up front? As for playing James Forrest, don't get me started - he looks like a little boy lost at international level."

Should Strachan stay or go?

In his media conferenceimmediately after Thursday's disappointment, Strachan said it was not the time to talk about his own future as Scotland manager.

While he stayed shtum, the rest of Scotland chatted and one BBC Scotland reporter put the question to the test on Twitter...

The ayes and naws were more evenly balanced on Facebook.

First, the Yes for separation voters...

Paul Bluey Grant: "Absolutely no way should he be kept on. The entire SFA needs to be changed as well as they are the ones who keep appointing these managers and give us second-rate English players with Scottish grannies who do not perform. All of the first team were slow and rubbish last night apart from Steven Fletcher and Steven Naismith."

Don Morrison: "Is this the Strachan that is reputed to have said before we played Georgia that it was not a must win game? Boy, did that loss come back to haunt us big time.

"I don't dispute what Strachan has done in the game and I am not saying he is a bad manager, but I find some of his selections and decisions quite baffling.

"He is too loyal to certain players when he should be playing in-form players. He obviously has his favourites while overlooking others like Charlie Adam to name one who is as good or better than other midfielders we have.

"Also, why could he not have played Griffiths and Fletcher together up front? As for playing James Forrest, don't get me started - he looks like a little boy lost at international level.

"No, I am sorry, but Strachan has failed. Now it is time to give someone else a chance. Alex McLeish, who did well in his previous time as national boss, is out of work would be my choice."

Craig Macdonald: "Target at the start of the campaign was to qualify. Failed to achieve it. Simple."

Richard Macmillan: "Yeah, he failed so time for him to go."

Tom Janes: "Taxi for Strachan. No progress has been made. He should have been gone after the game in Tbilisi."

Robert McCluskie: "Time for him to go. One goal in two games against Georgia and three points lost is not good enough. He is far too negative and plays players out of position too often."

And now for the No voters...

Bob Lambie: "Of course he should be kept on! Let's face it, he can only choose from the player's available to him and we have no world class players.

"He has progressed the team from what they were before he took over! They were just a joke up until then!"

Donald Grant: "Makes no odds who the manager is. Our players are not world class and our top league is a joke!"

Ross Mann: "With his experience, I don't think there's anybody that's Scottish that could do better job with these pool of players. It's chief executive Stewart Regan that needs to go."

Paul Maher: "He's the best we're gonna get for a while and another change of manager isn't the way forward!"

Sam Thomson: "I agree that there likely isn't a better candidate who would be willing to take up the position and commit to a long-term stay.

"A couple of names spring to mind, such as Derek McInnes, Tommy Wright, Martin Canning, Alex Neil (highly unlikely), David Moyes, but again it's a question of whether or not they would be willing to take up the position and commit."

Colin Hunter: "We don't have any world-class players to help us. No change in manager would make any difference."

Dave Blackhall: "Keep him on please, but on the condition that someone else other than Fletcher plays."

Problems lie beyond the players and manager

The Scottish FA has recently introduced regional youth academies, while the Scottish leagues have undergone another reorganisation, but some are still not satisfied that the structure of the game is right...

Jamie McCabe: "I think that there are much bigger problems in Scottish football than the guy who manages the national team.

"I'm afraid that our national game is in a total mess due to generations of mismanagement." 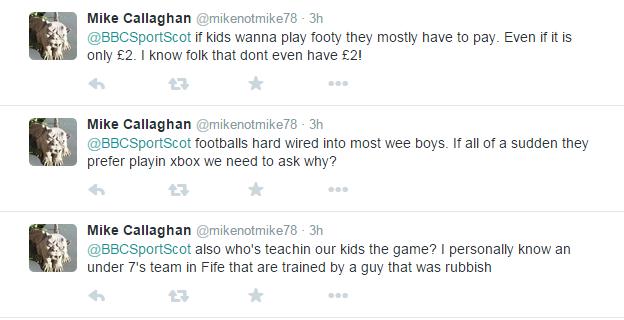 Bobby Watson: "Until adequate finances are put into the grassroots game (how about paying coaches for a start?) and a league restructure to a top 16 happens, our game won't progress.

"We have a poor product and poor technical players unable to deal with the professionalism at the highest level."

No matter the reasons, as the old adage goes, the league table doesn't lie...

The final word goes to another BBC Scotland reporter...