The German was overseeing his first game since replacing the sacked Brendan Rodgers - and he will have seen plenty to please him as Liverpool battled fiercely to secure a point.

Liverpool showed plenty of the pressing intensity Klopp demands but it was goalkeeper Simon Mignolet who did most to ensure the near-hysteria engendered by the new manager's arrival was not punctured by defeat.

Mignolet saved superbly from Spurs substitute Clinton Njie and from Harry Kane in each half and was busier than opposite number Hugo Lloris.

Liverpool also had chances to win as Belgium striker Divock Origi, in for Daniel Sturridge who is injured again, struck the bar with an early header but neither side could break the deadlock.

And the manner in which Klopp went around embracing his new charges at the final whistle suggested he was well satisfied with his opening 90 minutes in charge.

Liverpool's players will be hearing a lot from Klopp - and not just on the training ground at their Melwood headquarters.

The 48-year-old German prowled his technical area within inches of the pitch offering encouragement, especially when they came within earshot. They can expect no respite from his demands.

Klopp is well-known for his heart-on-the-sleeve style and it seems clear already that fellow countryman Emre Can is someone he believes can produce big things after a mixed Liverpool career so far.

The 21-year-old Germany international has figured at right-back and central defence more than in the midfield role he was accustomed to when he arrived from Bayer Leverkusen in a £10m deal in 2014.

So it was of significance that Can, who Klopp will have studied in the Bundesliga, was immediately played in midfield and responded with an energy and commitment that brought regular gestures of approval from his new manager. 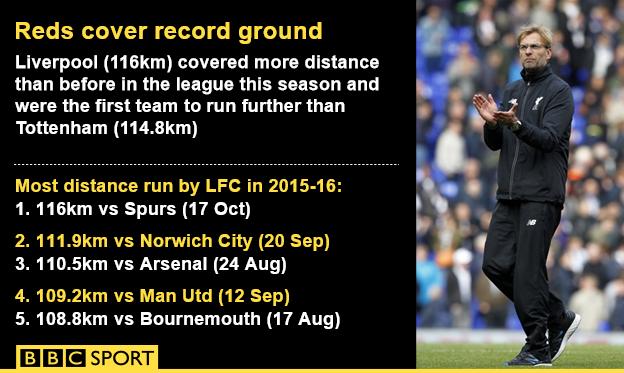 Liverpool had not kept a clean sheet in any of their eight games before their visit to White Hart Lane - and it was easy to see why when Spurs applied pressure.

The hosts were pushed back by Liverpool's determination to implement Klopp's pressing style in their early stages but when they got a foothold Klopp needed the intervention of goalkeeper Mignolet, who saved superbly from Njie and Kane, while only a desperate stop from defender Mamadou Sakho blocked Dele Alli.

Klopp greeted all those incidents with a clenched fist salute. He will, however, want to get to work quickly on ironing out the defensive flaws and uncertainties that the Reds have demonstrated his season.

Klopp happy to start with a point

Klopp felt Liverpool's performance gave him a good foundation, and said afterwards: "0-0 is not my dream result but it is OK.

"I am happy because I saw many good things, in the first 20 minutes we were pressing and were very aggressive.

"We will get stronger. We were a little bit nervous when we got the ball because the pulse was a little too high at this moment.

"There were many full-throttle moments in the game. We need to improve but after working with the players for three days I am completely satisfied."

The styles may be different - one stone-faced and suited, although occasionally highly agitated, the other in a tracksuit and all animated body language - but Spurs boss Mauricio Pochettino and Liverpool counterpart Klopp have much in common.

They are both unashamed advocates of intense, pressing tactics and want their players to be super-fit to carry out their wishes.

Spurs, in contrast, are now becoming accustomed to Pochettino's preferred style in his second season at the club. It is no coincidence they have won many games late on during his tenure.

At times at White Hart Lane, this was a match where Pochettino and Klopp turned their similar styles on each other, possession suddenly switching sides as the pressing game worked just as they wanted.

It will be intriguing to track the progress of Spurs under Pochettino and Liverpool with Klopp in charge - the clubs share similar aspirations.

'You need to be clinical' - Pochettino

Tottenham boss Mauricio Pochettino felt his side had looked more likely to win, saying: "Both teams played with a very high tempo and it was an exciting game.

"I am a little bit disappointed not to win because we created four good chances to score and the only clear one Liverpool had came when we were down to 10 men because Nacer Chadli was off the field getting treatment.

"In football you need to be clinical. We weren't but I am still very happy with the performance."

Liverpool return to action when they host Rubin Kazan in the Europa League on Thursday - this will be Klopp's first game in charge at Anfield. Spurs are also involved in Thursday's European action, playing at Anderlecht.