Northern Ireland's qualification for Euro 2016 is an achievement that may not be beaten, says Michael O'Neill.

Manager O'Neill, 46, led the country to their first major tournament since the 1986 World Cup in Mexico.

"I got a text from Wales manager Chris Coleman saying 'it does not get better than this' and I have to agree with him," O'Neill told BBC Radio 5 live.

His side ended top of Group F, the first fifth-seeded team to win a European qualifying group, losing once. 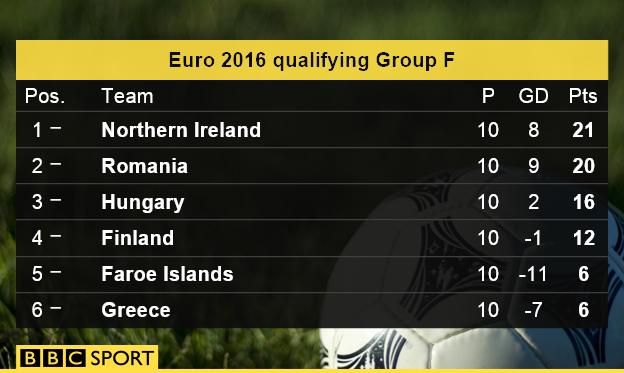 The team won just once in O'Neill's first 18 games in charge, before turning their form around with six victories in their next 12 games. A 1-1 draw against Finland on Sunday allowed them to claim top place.

"It is a fantastic achievement. What we have now is a squad full of belief and who will continue to improve. They deserve their place in the tournament," added O'Neill.

"We have a really good bunch of lads and have been the best team in the group. We are very effective, we know how to play and do the right things. That will stand us in good stead in France.

"I don't know how long I will be as a manager but I may never top this. How I am feeling, the bond I have with the players, how the country and supporters feel, we just want to keep building on that."