Bury boss David Flitcroft and Rochdale manager Keith Hill will put aside their friendship when their teams meet in League One on Saturday.

Flitcroft, 41, was Hill's assistant manager at Dale and Barnsley before taking over at Oakwell after 46-year-old Hill was dismissed.

Flitcroft added: "Mine and Hilly's relationship is incredible, I've loved the guy like a brother."

Hill's first stint at Rochdale began in December 2006 and a month later he brought in a then 32-year-old Flitcroft to work alongside him.

The pair guided Dale to the play-offs in their first full two seasons before they ended a 41-year wait for promotion at Spotland in 2010. 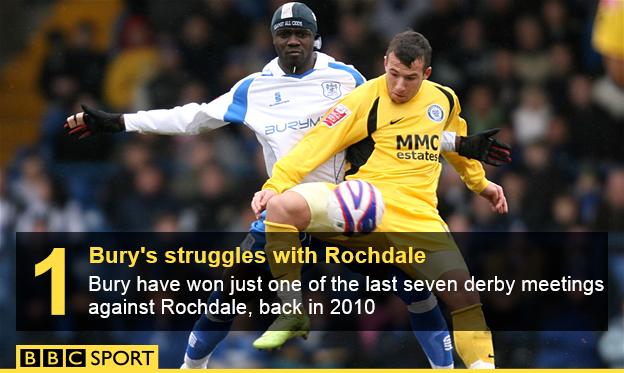 "Every time I see Bury winning, and don't take this the wrong way if you're a Rochdale supporter, I'm really pleased for David Flitcroft.

"On Saturday we're going to be arch rivals, enemies of the touchline and I'll be 100% playing and managing on the touchline for our supporters."

The Shakers were promoted under Flitcroft last season and sit fourth in League One, while Dale lie six points behind in ninth.

"It will be two friends coming up against each other who have the utmost respect for each other," added Flitcroft. "He loves seeing his team win and I love seeing my team win, so it's set up brilliantly.

"I love spending time with him, I love speaking to him on the phone and he's someone who will always be in my life."