Georginio Wijnaldum's four goals will make the headlines but Moussa Sissoko's performance summed up everything that was good and bad about Newcastle during their 6-2 win against Norwich on Sunday. 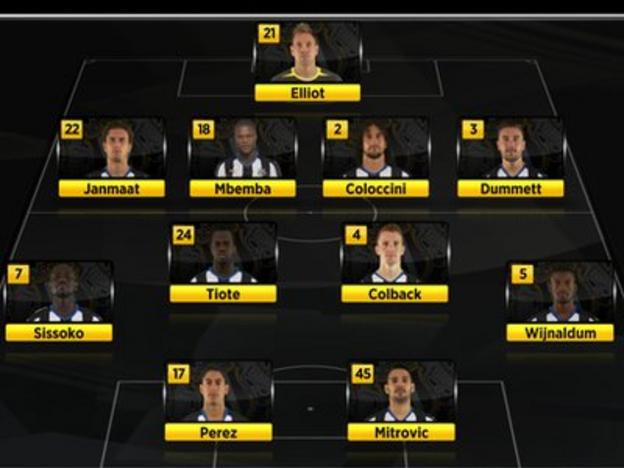 Going forward, Steve McClaren's side were fantastic, which is not something we have said too often this season - the six goals they scored against the Canaries were as many as they had managed in all eight of their previous Premier League games.

Sissoko, playing on the right of midfield, was a big reason for that, but he was also part of his side's problems at the back in the first half, because he did not track back and help his right-back Daryl Janmaat,.

That meant, defensively, the Magpies often left themselves wide open and they also put hardly any pressure on the ball whatsoever.

Newcastle ended up getting a really good win but they cannot leave themselves that open when they play better teams than Norwich - a side from the top half of the table would have taken them apart.

'Getting the best out of Sissoko'

You are going to have good days and bad days with Sissoko - this was definitely a good one.

I was at St James' Park for Match of the Day 2 and it was great to see the home crowd get so excited when he was on the ball.

Newcastle have other skilful players like Ayoze Perez who can get their fans on their feet but the difference with Sissoko is that he glides past defenders rather than dribbles around them.

When Sissoko got into his stride, his pace and strength meant the Norwich defence found him very difficult to stop.

He was also very direct, which made him even more dangerous. He made three of the goals and was heavily involved in another two so, when he gets his head up, he can obviously pick a pass too.

Sissoko is a fantastic talent but McClaren needs to work out where to play him to get the best out of him.

I would not go so far as to say he got away with it, because it worked brilliantly in one way - they scored six goals.

But at the same time, you have to remember that Norwich created loads of opportunities though their left-back Martin Olsson down his flank, usually when Sissoko was still high up the pitch - only six of his 35 touches before the break came in his own half.

The Canaries scored twice and also hit the post twice, so clearly they could have scored a lot more.

Even though they didn't, Newcastle still have the joint second-worst defensive record in the Premier League and McClaren needs to focus on that department as much as his attack.

The problem for McClaren is that if he wants to play two up front with Perez and Aleksandar Mitrovic, then Sissoko is going to have to play wide right or left, and you know he is never really going to track back for you there.

He had the same situation with Wijnaldum in the first half against Norwich, only on the left, which made things even worse.

Too often those four players would push forward, and none of them were looking to get back when the attack broke down.

The rest of the Newcastle team did not really push forward to support them, which left a massive gap for their other two midfielders, Jack Colback and Cheick Tiote, to cover.

They ended up sitting back, leaving gaping spaces for Norwich to break into, which is why Newcastle were so vulnerable on the break before half-time.

McClaren seemed to realise that, and did try to change it.

It appeared to me that Sissoko was told he had defensive duties too in the second half, because he was much more disciplined.

If that is what happened then well done to the Newcastle coaching staff, but if they want to climb out of the relegation zone, it is very important they find that balance in the future too.

'The fans will live off this result all week'

I never really felt that McClaren's job was on the line on Sunday but this was still a big win for him because it was his first in the Premier League as Newcastle manager, and it also lifted his side off the bottom of the table.

The way the Magpies fans responded when the game was in the balance showed they were behind him too. I don't think he was under great pressure before kick-off anyway but he is under even less now.

It might not have been totally convincing at times, but this display will galvanise the Newcastle fans ahead of next weekend's Wear-Tyne derby.

I know from working at the club as Kevin Keegan's defensive coach in the 1990s that they will live off this result all week, but playing Sunderland at the end of it will up the ante even further.

Victory will give the players a lot of confidence as well, but they will face a very different test against the Black Cats.

Sam Allardyce's side will give them absolutely no space whatsoever, which is the complete opposite of what Norwich did.

At times on Sunday, it seemed like I was watching a training game - at the Stadium of Light it will be more like a game of chess.