Substitute Bobby Zamora had the experience to steer Brighton to victory with his late winner against Leeds United, says manager Chris Hughton.

The 34-year-old striker came on for the last 12 minutes of the game at Elland Road, and pounced with a minute of normal time remaining to win it.

It was his first goal for Albion in 12 years, following his summer return.

"Bobby in those positions has that quality, we know what he is," Hughton told BBC Sussex.

"He's a different player than he was 10 years ago, but we know what he can give us at a time when we need it. 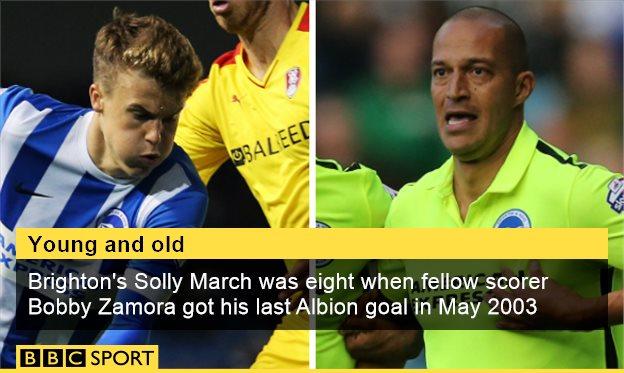 "We needed Bobby's presence to keep the ball for us and the goal was an added bonus."

Andrew Crofts made his first appearance in more than 12 months after two serious knee injuries when he replaced Liam Rosenior in the second-half.

The former Norwich and Gillingham winger came through the last half hour unscathed.

"I'm really pleased for him, nobody can feel what he's feeling at the moment," Hughton added.

"It's really delightful for him to be back, he's made sure in the second one he's done everything right, longer than the first one.

"He waited until he was in the position where everything was right and he's had no problems."